I really never complain about anything officially, like most people I just have a good moan to myself if something upsets me. If it’s a place then I just vow never to darken their doors again, and I stick to it. If it’s a product which I’m unhappy about then I never buy it again and that’s that. 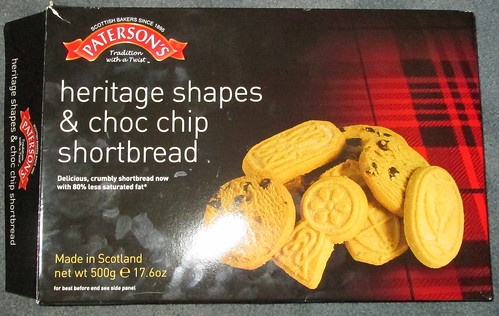 Recently I bought a box of Heritage Shapes Shortbread from Paterson’s, a Scottish manufacturer that I’ve been buying shortbread from for getting on for 40 years. I couldn’t believe how disgusting the shortbread tasted. I had a look at the box expecting to see those dreaded words New Improved Recipe, but they weren’t there. Instead it was – now with 80% less saturated fat which was proudly printed on the box. 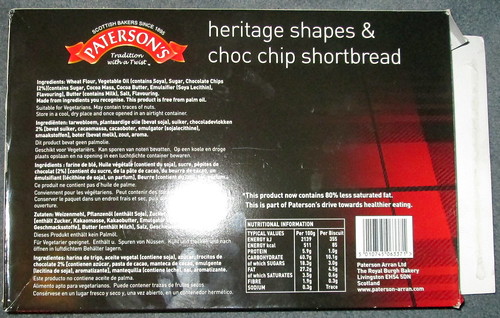 That accounts for the fact that the shortbread now tastes of cardboard then, I thought. I’m not exaggerating, cardboard is the only flavour which these biscuits taste of. What is even worse is that some time after eating one of them they come back to visit you again in the shape of cardboard flavoured burps! I’ve never eaten a biscuit which has made me burp before.

Anyway, I was not a happy bunny, because shortbread is a traditional Scottish food and these biscuits are the sort of things which people buy as gifts to give others as reminders of Scotland. I feel embarrassed that people might think that these represent Scottish baking. So I wrote Paterson’s an email:

We bought a box of your heritage and choc chip shortbread recently and have been very disappointed with the flavour of them. They taste of cardboard. As I have always bought your shortbread in the past I was somewhat puzzled, but on closer scrutiny of the box I noticed that it says you are now using 80% less saturated fat.

So problem solved you need the fat in baked products to give the flavour, especially in something like shortbread. Shortbread should be an indulgent treat but I’m afraid I’m now going to have to go back to baking my own in the future if you are going to persist with this change to the recipe.

And they replied thus:

Thank you for getting in contact, it is greatly appreciated. We are so sorry to hear that you were disappointed with the taste of our Paterson’s Heritage Shapes and Choc Chip Shortbread. As you mention, this product does contain less than 3% saturated fat. We are proud to offer what we consider to be a delicious, guilt free, melt in the mouth indulgence, however we regrettably accept that it will not be to all tastes.

We are truly sorry that our product was not to your taste or preference on this occasion and wish that it were otherwise. However, we are very grateful to you for taking the time to write to us – we really do appreciate all feedback.

Thanks once more, and apologies for the delay in responding to you.
Best Wishes,
Jonathan

Well, far from being melt in mouth-ish the new recipe sticks in your teeth and has a cloying texture.

So there you have it. We aren’t being trusted to eat a sensible amount of tasty bites nowadays. The health squad have got at shortbread, just in case we go mad and eat a whole box at one sitting presumably.

Butter happens to be the most important ingredient in shortbread and of course it’s also the most expensive so it’s to the manufacturer’s advantage to cut out the expensive part of the recipe and substitute something a lot cheaper, never mind that it makes the product disgusting, it’s supposedly healthier!!

Paterson’s are behind the times anyway as the food experts are now saying that butter isn’t bad for you at all. It’s the fact that the food industry tampers with natural products which makes them unhealthy. According to the late lamented cook Clarissa Dickson Wright the bit that they remove from skimmed milk is the thing which helps your body break down the fat in the milk!

So it seems that I now have to go back to making my own shortbread because there are some people in the world who are greedy and have no will-power and can’t be trusted with biscuits. To be fair, my own shortbread always tasted better than any shop bought kind anyway. I’m still mortified that non-Scots might eat the horrible stuff though and assume that that is what shortbread should taste like.

As you can see, butter appears second to last in the list of ingredients, apart from flavourings – which presumably is cardboard – meaning there’s a minuscule amount in the shortbread when it should be the main ingredient, along with flour.