I have been getting quite a bit of reading done, despite the DIY obviously taking up a lot of time. I read The Brading Collection by Patricia Wentworth, it was first published in 1952 and is a Miss Silver thriller.

Lewis Brading is a wealthy man who has amassed a large collection of famous jewellery. Famous in that the pieces have often played a part in history, such as the wearer having been murdered whilst wearing a brooch, or there is a supposed curse on something.

Brading has been quite happy to acquire the pieces nefariously over the years and perhaps that it why he is so worried about his collection being stolen. Brading has a secretary, James Moberley and he doesn’t trust him, but at the same time he seems to be stopping Moberley from leaving his job. Miss Silver declines to help Brading but circumstances soon change and Miss Silver ends up investigating. I enjoyed this one and am becoming more attached to Miss Silver with each book I read.

Tom Brown’s Body by Gladys Mitchell was first published in 1949. The setting is a boarding school called Spey College. The schoolboys play a large part in the book, they seem to be quite out of control and two of them leave their rooms and go jaunting about during the night on bikes, planning to go to watch a dog race. They get completely lost in the darkness and eventually find a cottage with lights on, but they see one of their masters through the window and are worried that he has recognised them.

Meanwhile Mrs Bradley has been looking into her family tree and has discovered that one of her ancestresses was a witch in the 17th century. An expert on such things has told Mrs Bradley that there is an old white witch who may be in possession of Mrs Bradley’s relative’s ancient spell book.

Of course the modern day witch is living near the boarding school and when one of the schoolmasters is murdered Miss Bradley gets involved. There’s no scarcity of suspects as Mr Conway – the victim, is such a nasty character, there are plenty of people who would have been glad to be rid of him.

I enjoyed this one but not as much as The Brading Collection. I’m not drawn to Miss Bradley as a character and as ever I’m left wondering why Mitchell made her so unappealing. She is described as being lizard-like or sometimes yellow skinned with claw-like nails. The actual mystery is quite good though.

I read these two for the Reading My Own Damn Books Challenge. Two down,, but who knows how many still to read – not me anyway! 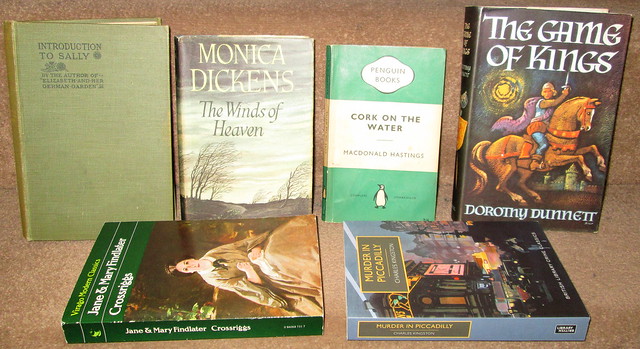