The city of Chester is a lovely place to visit if you want a wee bit of a change from the rural scene in nearby Wales which is where we were staying for a few days when we visited this place. Chester is absolutely choc full of history. We stuck to the townscape but if we had done our homework beforehand we could have visited a Roman amphitheatre and all sorts – next time maybe.

Chester was founded by the Romans in AD 79 and in the photo below you can see that there’s still quite a lot of the original Roman wall that they built around their fort still in existence. 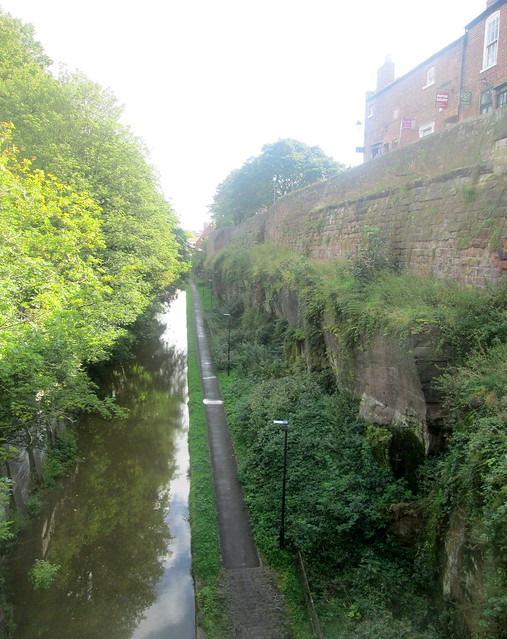 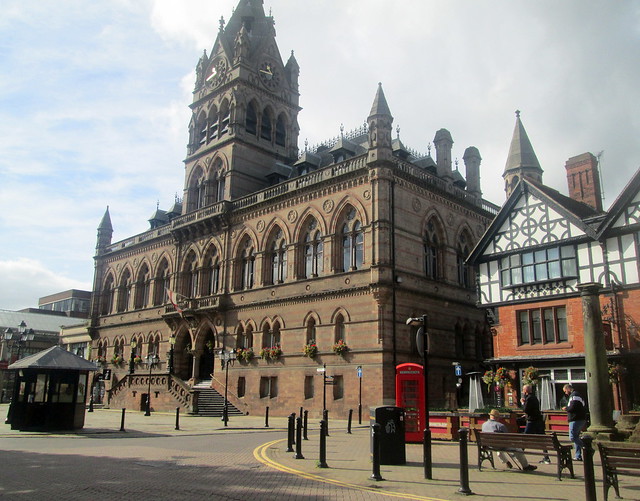 We didn’t take many photos as there were so many people about, but in the one below you can see the famous Chester Rows – the two tier medieval shops which are still being used as shops today. There are lovely arcades which you can wander around in, keeping dry if it happens to be raining. 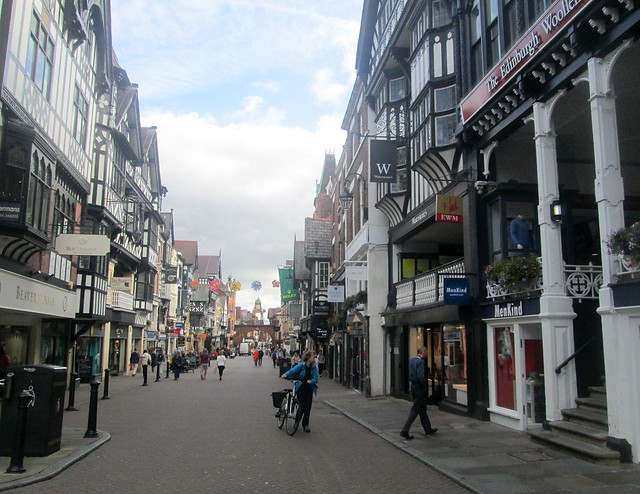 Next time we visit we’ll definitely be aiming for the Roman amphitheatre, which you can see here.

We did visit the Cathedral but that will be in another post.

We travelled on from Morecambe to Alcester in Warwickshire which is a small town with around 9,000 inhabitants. Of course you’ll know that when an English place name has chester, caster or cester in it it means that their was a Roman camp there. Castris is Latin for camp. So it’s no surprise that there’s an interesting wee museum in Alcester (which the locals pronounce Ulster, exactly like the place in Ireland) and it has quite a lot of things in it which have been found locally. Apparently Roman Alcester is only a few centimetres below the soil. As someone who was brought up in Scotland and north of the Antonine Wall, the Roman Empire stopped just a few miles south of Dumbarton, I find it really exciting to think that you could be digging in your garden and discover Roman artefacts. If I lived in Alcester I think I’d be forever poking around in the soil.

Anyway the town is only 8 miles from Stratford-on-Avon which we also visited but Alcester turned out to be a really lovely wee town although like many places it’s feeling the pain of the downturn in the economy. There are lots of charity shops, which I’m not really complaining about because as you can imagine – I did rather well out of them bookwise!

This is the main street, I think it’s really lovely, it’s pretty enough to be on a jigsaw puzzle or chocolate box. I’m used to grey stone buildings which can be quite depressing at times so whitewashed buildings make a nice change. This is one of the pubs, I have to say that Alcester is well served with boozers! This road is just off the main street in Alcester and I just had to take a photo of it as the buildings are leaning every way you can imagine but still managing to stay up somehow. This small road or alley way close to the main street feels like Shakespeare could have been a frequent visitor, I’m sure the place has hardly changed since those days. This is the buildings on the opposite side of the street. Our own house is over 100 years but it always amazes me that there are actually people living in these types of houses which must be about 500 years old, or maybe even older. These brick houses are at the bottom of the same street. Obviously Jack took this one as that’s me in my raincoat on the left hand side, not realising that he was taking a photo. As you can see it wasn’t actually raining at this point, things did get much worse!

So that’s Alcester, a small town that I would definitely visit again, I’m sure there’s much more to explore in the area. We hadn’t even heard of the place until we bought a grandfather clock for a spot in our hall which was just crying out to be filled with one. I had wanted a Scottish clock but I had been looking for years but in Scotland they tend to go for silly prices so I gave up and bought an English one as you can see.

It has the name T. Jorns ( a very unusual name) and Alcester painted on the clock face and when we looked it up we discovered that it was in Warwickshire, which accounts for the apples painted in the corners of its face as it’s apple growing country. I’m sure that when I started to do some research that I discovered that there was still a shop in Alcester which was owned by a Jorns, an electrical shop. Sadly there’s no trace of one now, which isn’t really surprising as there are hardly any independent electrical places around now. Thomas Jorns did actually make the clock, sometimes the name and place on a clock just tells you where it was bought rather than made. It’s just a 30 hour one which means that you pull a chain to wind it up instead of using a key but it keeps good time and has a lovely sound to the bell when it strikes the hours, and as it’s nearly 200 years old I think that’s not at all bad. If I forget to wind it up and it stops – I notice immediately because it sounds as if our house’s heart has stopped.