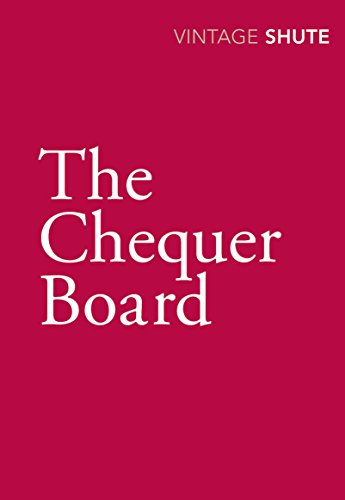 The Chequer Board by Nevil Shute was first published in 1947 and it was my friend and one time neighbour Christine who pointed me in its direction, and I’m glad she did as it was a really good and interesting read.

John Turner, a flour salesman has been having health problems for a while, he had been badly wounded during the war and it was thought that he wouldn’t survive his wounds. He does get better but the fragments of shrapnel still lodged in his brain years later have started to give him problems, the upshot being that he is given around one year to live.

John married just before the war but over the years he and his wife have grown apart, his prognosis brings them together again and when John decides to track down the men he feels had given him the will to live again when he was in hospital, his wife helps him track them down.

It was a very disparate bunch of chaps who talked to John when he was unable to move and having to lie flat in a hospital bed. One was a very snobby RAF pilot, another was a young black GI who had been based in Cornwall, and a young corporal charged with murder. Their stories and experiences have been in John’s mind since the war. He feels they saved his life and before he dies he wants to know what has happened to them over the years.

I think the most interesting story is the one about the experiences of black GIs in Cornwall. The black soldiers were given the task of setting up camp before the white GIs turned up in Cornwall and the black men caused quite a sensation in the small town, making themselves very popular as they were very obliging, helping people to fix things that had been left neglected and broken due to the fact that most of the local men were off at war.

Everything changes though when the white GIs turn up and take exception to having to share the local pub with ‘niggers’. The US high heid yins decide that the pub will be off limits to the black GIs but the pub owner objects to that and bans the white US soldiers.

According to this book there had already been trouble in two other English towns where there had actually been shoot-outs between black and white US soldiers.

The Chequer Board goes some way to explaining Daphne du Maurier’s attitude towards the US in her book Rule Britannia. (1972)

This is the first book I’ve read by Nevil Shute and I’ll definitely be reading more.

This is du Maurier’s last novel and although it is set in her beloved Cornwall, it bears no resemblance to her other Cornish books. It is set in the 1970s and Britain’s relationship with the rest of Europe has broken down. The U.S.A. has taken over Britain, supposedly sharing power and the combination of the two countries is known as USUK.

It soon becomes apparent that the U.S.A. is in complete control and the local inhabitants are not treated well. The locals revolt.

The character of Mad (Daphne) is an 80 year old retired actress who was born in London but regards herself as Cornish. Although she has a middle-aged son and a grand-daughter, she felt the need to adopt five boys who range in age from 3 to 19.

When one of the American soldiers goes missing things take a nasty turn and the whole area of Poldrea is punished. Although the water and electricity has been cut by the invaders, the family manages to discover that all the Celtic parts of Britain are fighting back – Cornwall, Wales and Scotland. I enjoyed the book but wonder why she chose to put the boot in to the U.S.A.

During World War 2, Daphne du Maurier lived in Cornwall surrounded by American forces who were camped there waiting to take part in the D Day invasions of France. It sounds as if she didn’t appreciate their presence and nearly 30 years on she wrote about them being the bad guy invaders. Other women of Daphne’s generation that I know of adored the influx of Yanks to their neighbourhood, maybe a bit too much.

There are elements of Peter Pan in Rule Britannia. Mad’s adopted sons are the Lost Boys of J.M. Barrie fame. Barrie had been an honorary uncle to Daphne and her sisters and the Llewelyn-Davies boys (the Darlings in Peter Pan) were the du Mauriers’ cousins. Writing about her ill-fated cousins must have been like bringing them alive again for her.

In 1969 du Maurier accepted an invitation to join the political party Mebyon Kernow (Sons of Cornwall). They were (are) trying to keep Cornwall Cornish. Her last novel seems to be have been her way of protesting.

Why did she choose Americans for the baddies? – I have no idea. I think the problem has always been that rich people in the south of England have always wanted more than their fair share of everything. They are quite happy to buy what should be family homes in beautiful rural areas and inhabit them for only a few weeks a year, pricing locals out of the market and making it impossible for young people to get somewhere to live in the place that they have been brought up.

It takes place all over Britain I suppose but it just so happens that it is worse in the Celtic regions. St. Andrews, about 25 miles from where I live is more expensive than London for property and rent.

Dear Daphne wrote a book about her local area being swamped by foreigners, I just have a moan.

It is just as well that she isn’t living now because things are much worse in Cornwall than they were in her day and I’ve been told that one village only has 3 houses in it which are lived in by locals.

Having said that, if you get the chance you should visit Cornwall. I read Rebecca for the first time when I was 12 or 13, I think, and then went on to her other Cornish novels. I fell in love with the place but it took me about 30 years to get around to actually seeing it. It’s about 750 miles from Fife – a very long drive, but worth it.

Cornwall feels a lot like Scotland, the architecture is very similar with stone houses and slate roofs, and of course you can’t get any further west, so to my eyes, it’s almost perfect.