I have these two books in a lovely Folio Society edition. I used to be a member but nowadays I tend to buy their books in second-hand shops. Again, they’re on my 2011 reading list. RLS is of course Robert Louis Stevenson but he tends to be shortened in Scotland. I read somewhere years ago that his middle name was pronounced Lewis – as he came from a very strict Presbyterian family which wouldn’t have had anything to do with French Catholic sounding names. It seems strange that they gave him such a name then.

Anyway, RLS wrote quite a lot of travel books and these are two of them. The Amateur Emigrant is about his journey from the Broomielaw Docks on the River Clyde in Glasgow to New York in 1879, on his way to San Francisco to be with the American married woman that he had fallen for. The voyage was grim and RLS had always been sickly so it must have been even worse for him but his descriptions of the types of people who have decided to seek a better life in America is well worth reading and he makes a lot of observations about their personalities. I had imagined that emigrants would have been ‘go-getting’ types but RLS describes them as people who had failed to do well in their home country and predicted that they would fare no better in the new one because of their attitudes. It seems that work was as hard to come by in New York as it was in Scotland and although in my family uncles opted to go to Australia in the 1960s I have to say that life wasn’t any better for them there than it would have been if they had just stayed at home, and was probably even worse for their kids, jobs wise anyway.

In The Silverado Squatters RLS is married to his beloved Fanny Osbourne who had managed to get a divorce. As you can imagine the Stevenson family were dead against Fanny who was years older than him and seems to have been ‘a bit of a gal’ but she made him happy. They spend their honeymoon near Calistoga in California in a wreck of a ‘house’ which had been inhabited by miners years before. It had no windows and holes in the roof so it’s just as well that the weather was good. I think RLS probably hoped that the dry heat would help with the consumption which he had suffered from for years. The place was infested with rattlesnakes which they didn’t realise were dangerous until the end of their month long stay there.

I enjoyed this book but I think that it might be of even more interest to Americans who might have travelled to the places that he mentions. He met Californian wine makers in the Napa Valley and saw the fancy mock French labels which they put on their bottles because then they could get people to buy it. RLS was impressed with the wine but Californian wine was in its infancy then and I can remember fairly recently that wine snobs were very sniffy about ‘New World’ wine. ‘The smack of Californian earth shall linger on the palate of your grandson.’ RLS.

He seems to have met quite a lot of Scotsmen around that area and they were always glad to hear another Scotsman and hear about the old country. They must have been homesick.

The Silverado Squatters ended very abruptly though which I thought was a bit strange, almost as if he had had to pack quickly and never added any more to his writing after he left the place. 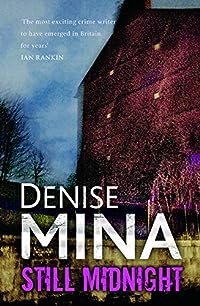 This is one of the books which I picked up on my last visit to the library. I’d been meaning to read something by Denise Mina for years but this one didn’t live up to my expectation so I’ll leave it a while before trying another one, just in case this one is not as good as the others.

It’s a crime novel set in Glasgow but it doesn’t have the feeling of Glasgow the way a book by Ian Rankin or Alexander McCall Smith exudes the atmosphere of Edinburgh. University Avenue which I’ve frequented for 35 years or so was unrecognisable. Apparently the students are all tall and tanned!!

There’s nothing much in the way of humour, no smart ‘patter’ between characters and in fact there are very few characters who are even mildly likeable and that always makes it very difficult to enjoy a book. You could say that I have no right to expect humour in a crime novel but sans humour – it just isn’t Glasgow. Christopher Brookmyre manages to do it in his crime novels, although he sometimes takes it a wee bit too far.

It’s the story of the Anwar family who have a small corner shop and when the father is kidnapped a ransom of £2,000,000 is demanded, but they don’t have anything like that kind of money.

I saw the ‘twist’ in the story from a long way off. The blurb has Val McDermid (another Scottish crime writer) saying ‘Denise Mina is set to carve a niche for herself as the Crown Princess of Crime.’ Which I thought was the funniest part of the book, I suppose Val sees herself as the Queen of Crime then! 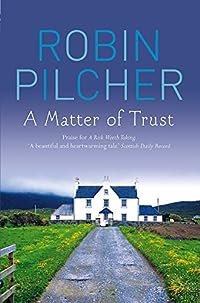 Pilcher is quite an unusual surname so I wasn’t surprised when I discovered that Robin Pilcher is a son of Rosamunde Pilcher. I’ve been enjoying some of her books recently so I thought I would see what his are like. As he was born and brought up in Dundee he definitely comes under the category of Scottish author.

I really enjoyed this book which was published in 2010 and is set in West Sussex, Alloa and Manhattan. At times his writing reminded me of his mother’s, although it took him far fewer words to tell a good story, Rosamunde’s books tend to be chunky.

It’s an easy, smooth and quick read at 294 pages long and although the chapters jump around a lot going backwards and forwards in time and place it didn’t make it difficult to keep track of the story. I found it to be one that kept me guessing to the end which I was thankful for because I’ve found a few books that I’ve read recently to be amazingly predictable.

The main character is Claire whose father died when she was very young and when her mother eventually re-marries she finds herself transplanted from West Sussex to Alloa in Scotland. Claire’s step-siblings are less than chuffed about their home being ‘invaded’ by Claire and her mother. Jonas, a young neighbour, becomes her friend, but things don’t go to plan.

I’ll be looking out for some more of his books in the future.

It’s St. Andrew’s Day – Scotland’s patron saint, but we don’t really do anything to celebrate it, no flag or kilt waving. But I thought it would be nice to read and ‘flag up’ a Scottish book for the occassion. Here it is!

September was first published in 1990 and is a sort of loose sequel to The Shell Seekers in that Noel Keeling appears in it as a minor character and there are references to the wider Keeling family in it.

Although I really enjoyed The Shell Seekers I have to say that I loved September, it’s a real comfort read and I can see myself going back to this one from time to time over the years.

It’s set mainly in Scotland in a fictitious place called Relkirkshire which is described as being north of Fife, which is where I happen to be sitting at the moment, so I imagined the setting as being Perthshire, the descriptions certainly sound like that lovely county which is a wee bit north of here.

The book begins in May and finishes in September and in the middle of it Rosamunde Pilcher takes us off on a summer holiday to Spain to get a wee bit of summer sunshine and escape from the rain in Scotland, just as lots of people do in real life. She did the same thing in The Shell Seekers only in that one she took us off to Portugal.

It’s a family saga involving lots of the families within the Balmerino estate and the wider neighbourhood from the laird and his wife to the Indian family running the local shop and there’s even an evil mad-woman whom Pilcher has given the surname of Carstairs, which happens to be the name of the State mental hospital in Scotland.

I’m not going to say any more about the story because I don’t want to spoil it for anyone as I definitely recommend it as a book to immerse yourself in when you are in need of a bit of rest and recuperation. It’s one of those books that you really don’t want to come to an end.

I didn’t see much Scottishness in The Shell Seekers but with September Rosamunde Pilcher definitely proves herself to be a Scottish writer. She even understands the standing which the Episcopal Church has within Scotland and its relationship with the Church of Scotland, and I can assure you that there are plenty of Scots who are completely clueless about that.