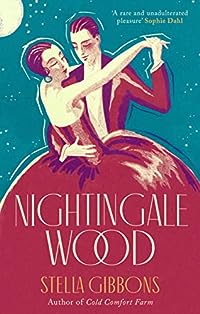 Nightingale Wood by Stella Gibbons was first published in 1938 but my copy is a Virago Modern Classic. This is a really enjoyable read, four stars on Goodreads I’d say. Inevitably though I find myself saying that you shouldn’t expect it to be as funny as Cold Comfort Farm, which truly did have me laughing out loud a lot, wayback when I was a teenager, I don’t know what effect it would have on me now though.

Anyway, in Nightingale Wood Viola has been widowed after just one year of marriage. Her husband Teddy had come from a wealthy family, his parents were appalled that their son had lowered himself to marry a girl who just worked in a shop. Viola ends up moving in with her parents-in-law, Mr amd Mrs Withers and their two almost middle-aged daughters Tina and Madge. Everyone seems to have given up hope of them ever getting married and moving out, so it’s a very strange household which Viola finds herself living in.

Mr Withers is miserably mean with money and he’s amazed to discover that his son died leaving his widow just about penniless, although as Teddy worked for his father and he was paid pennies in wages it’s a mystery how he was supposed to leave money to Viola. She would leave their home, The Eagles, if she could but she has no family of her own to help her.

That makes it all sound pretty depressing but really it isn’t. One of the sisters-in-law is in love with the chauffeur, the other one adores dogs, and the very well off Spring family are always entertaining the rest of the local nobs.

Viola falls for Victor Spring, the very handsome son, but he has been going out with a girl forever. Is there any hope for Viola?

You’ll have noticed that this bears more than a passing resemblence to a fairy tale. But is has a fair share of humour in it too, mostly from Viola, a very likeable character.

As I said, it was published in 1938 and it has the snobbishness and even anti-semitism which you sometimes come across in books from that era. It also mentions the possibility of a coming war, and that scoundrel who would have been crowned King Edward VIII, if we hadn’t got lucky.

The book has an introduction by Sophie Dahl.

It was Susanne who recommended this one for the CPR Book Group which is a place for neglected authors or books. The only books by Arnold Bennett which I had previously read were all set in The Potteries and this one is completely different from them, as far as I can remember anyway because I think I was a teenager when I read them, which wasn’t yesterday! I don’t know how widely read his books are nowadays, I certainly haven’t come across many people reading them but this one is certainly worth reading.

I really enjoyed this book which was first published in 1902 but my copy is a 1954 Penguin, orange. It could just as well have been in their green vintage crime livery because that is what it is.

The Grand Babylon Hotel in London is the sort of discreet but oppulent place that if you have to ask the price – you can’t afford it. The American multi millionaire Theodore Racksole is staying there with his daughter Nella and he isn’t pleased by the way the head waiter, Jules is looking down his nose at them. On the spur of the moment Theodore decides to buy the prestigious hotel, at least then he’ll be able to get the steak and bottle of Bass which he wants.

Things aren’t what they seem to be and it isn’t long before Theodore and Nella realise that there are nefarious goings on behind the facade of quiet classiness.

This was originally published as a serial and Bennett wrote the 15 installments in 15 days and sold it for £100. It was described as the most original, amusing and thrilling serial written in a decade.

Arnold Bennett lived at the Savoy Hotel in London and it was the chef there who came up with the dish which became known as Omelette Arnold Bennett because he was so fond of it. You can see Sophie Dahl whipping one up if you’re interested.

There aren’t many people who have had dishes named after them. The only others that I can think of at the moment are Peach Melba and Melba toast, named after the opera singer Dame Nelly Melba and Pavlova after Anna. Eggs Benedict too, Lemuel Benedict was an American stockbroker. There must be others though.