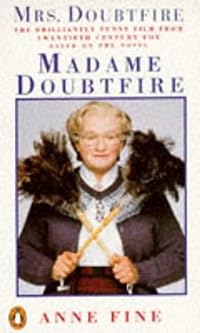 Madame Doubtfire by Anne Fine was first published in 1987 and I can’t remember where I got our copy from (I think it was Jack who bought it) but it’s signed by the author. This is of course the book which inspired the film Mrs Doubtfire which starred the talented and much missed Robin Williams.

It’s a long time since I watched the film but I think the book is a bit more serious than the film was, but no doubt a comedy was better for the box office.

Daniel is a father of three children and he and his wife are recently divorced, but that hasn’t stopped the animosity, in fact things are getting worse between him and his ex-wife. He’s an out of work actor, living in a town which only has one theatre, so he has very little opportunity to find stage work. His ex-wife Miranda has a very well paid job and it’s because of her work that they’re living in the small town instead of London where Daniel would have a better chance of finding work.

Miranda is determined to keep Daniel away from the children as much as possible, and constantly flouts the judicial access agreement despite the fact that she really needs help with the children. When Miranda decides that she’s going to get a nanny/housekeeper Daniel decides to use his acting skills to pose as an elderly lady and applies for the job. Madame Doubtfire is definitely a one off, but the children very quickly realise who she is but they miss their father so are happy to play along with the situation. So begins a sort of double life for them all, duping Miranda who it seems is having to work such long hours and is always dashing off, she never really pays much attention to anyone.

This was a good read, the first that I’ve read by Anne Fine. It’s probably aimed at children of about 12 but is entertaining for any age. In the film Mrs Doubtfire is Scottish which I think worked really well but Anne Fine didn’t write her as a Scot, it was probably Robin Williams’s idea to do that. However Fine did live in Scotland for a while and I recalled that she got the name of Doubtfire when she spotted it painted above a shop in Edinburgh. You can read about it here.

Sadly this was before my Stockbridge visiting days as I would have loved to have a rake around that shop, if I could have withstood the cat pee smell!

I’ve been looking for these Mary Stewart books and although I had been hoping to find hardbacks in a secondhand bookshop, I decided to settle for the copies in the photo below when I found them in a Stockbridge, Edinburgh bookshop. The covers are so of their time. Airs Above the Ground is a 1967 reprint, it was originally published in 1965. Mr Brother Michael was published in 1959 but this reprint was published in 1971 – the eighth impression. 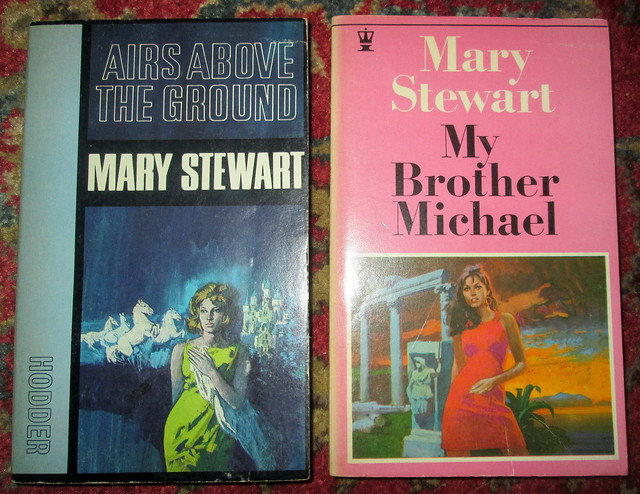 I did read a lot of Mary Stewart’s books way back in the 1970s but I think that I missed Airs Above the Ground and My Brother Michael back then, so I’m really looking forward to reading them soon – for the Read Scotland 2017 Challenge of course.

If you are a regular visitor to ‘Pining’ then you’ll realise that Stockbridge in Edinburgh is my favourite stamping ground for books, but when I’m there I never take any photos of the place, I’m too busy perusing book and charity shops and also it’s quite a busy area so it would be impossible to take photos without getting a lot of people in them. So if you want to know what Stockbridge looks like have a keek here.

I had been meaning to visit Evee and Peebles for ages, but life got in the way, mainly all that house selling and moving stress. But we managed to get down to Peebles a few weekends ago and took the chance to visit the Peebles Peace Group annual book sale. What an amount of books they had gathered together for the sale! All sorts of books although the fiction was mainly modernish I did manage to pick up a few oldies as you can see, if you twist your neck, sorry about that I should have rearranged the photo. 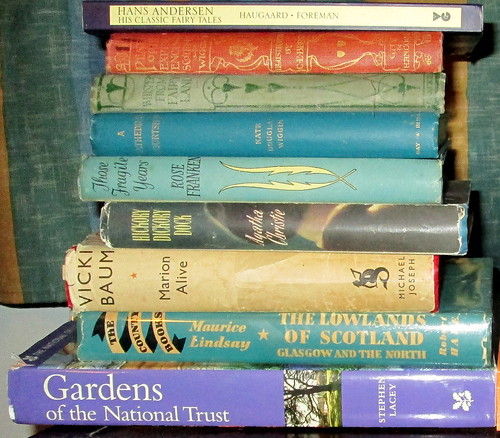 As you can see, Jack reigned himself in compared with me, as usual. I might read these ones too sometime. 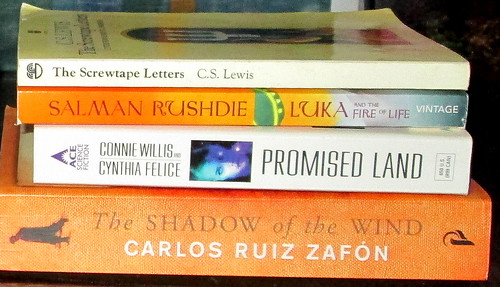 The Gardens of the National Trust by Stephen Lacey
Marion Alive by Vicki Baum
Hickory Dickory Dock by Agatha Christie
The Lowlands of Scotland – Glasgow and the North by Maurice Lindsay
A Cathedral Courtship by Kate Douglas Wiggin
Penelope’s Experiences in Scotland by Kate Douglas Wiggin
Those Fragile Years by Rose Franken
Hans Andersen His Classic Fairytales. Illustrated by Michael Foreman

Some Whispers from Fairyland (lovely illustrations) was bought from the Oxfam shop in Stockbridge, Edinburgh

At Peebles Jack bought:
The Screwtape Letters by C.S. Lewis
The Shadow of the Wind by Carlos Ruiz Zafon

The other two, Luka and the Fire of Life by Salman Rushdie
Promised Land by Connie Willis and Cynthia Felice, he bought elswhere.

A great day out was had by all, I’ll show you some photos of our walk along the banks of the River Tweed soon.

We had a lovely day out in Edinburgh yesterday, keeping well away from Princes Street. I’m from Glasgow and we laughingly call such a trip capital punishment.

First we visited the National Gallery of Modern Art, it has free plentiful parking and free entry so no worries there. We used to take our boys to the gallery quite often when they were wee, you can’t start them off too young. I can’t tell you how impressed an art teacher was when one of them recognised a Henry Moore from a photograph. Unfortunately there is a Damien Hirst exhibition on at the moment and it just left me completely cold. Fish, a dead sheep and a medicine cabinet. I just don’t get it at all and to me his whole career has come about because the so called experts weren’t brave enough to stand up and say what garbage his ‘art’ really is. The diamond encrusted skull was so unoriginal and boring.

I watched Newsnight Review last night and Kirsty Wark and company seemed to be surprised by how bad his attempts at more traditional art were. Actually, they wondered if he had deliberately made poor attempts as they didn’t seem to think it was possible for the great Damien Hirst to be so evidently talentless.

Well, I’ve never seen any evidence that he has ever had any talent. It’s just The Emperor’s New Clothes all over again.

Anyway. To shake off the Hirst mind numbingly boring experience, we decided to take a walk along the Water of Leith path which is just at the back of the Gallery. We hadn’t been that way before and decided to turn left and took the path to Stockbridge rather than Balerno as we haven’t the foggiest notion of what there is to see at Balerno. It was a really lovely day and it was quite busy down there what with joggers, walkers and cyclists. The water was really picturesque with great reflections of the autumnal trees. I was surprised that there is so much housing along the way and some really great buildings, both modern, old and sort of repro. It must be a popular place to live as it is so rural but close to the city.

It wasn’t long before we were mounting the steps leading to Stockbridge which always seems to be quite villagey to me. It even has a traditional butcher shop and I can tell you that they are really thin on the ground in Scotland now – and I never thought I would find myself saying that. That’s Tesco for you.

There are nice independent shops like a cheesemonger as well. It’s just a pity that there are so many charity shops, although I shouldn’t really complain about that as we did buy quite a few books. Now we just have to find space for them, usual problem. It was nice to see that Scotmid has taken over the old Woolworths shop as I know that the local residents had a bit of a battle to stop one of the big supermarkets from taking it over. That would have killed off the whole area shop-wise.

So if you ever feel tempted towards capital punishment do yourself a favour and shun Princes Street for a nice slice of real Edinburgh life.