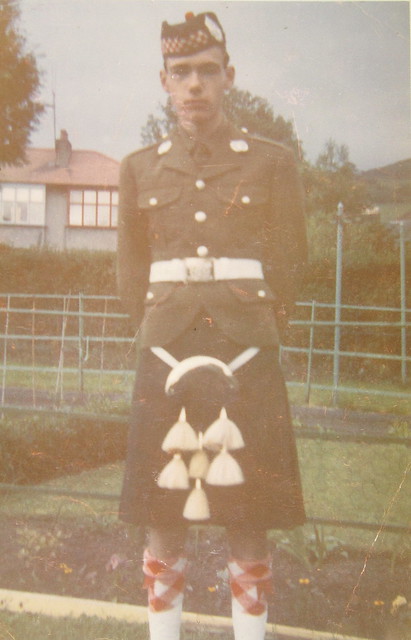 It’s a while since I did a Blast from the Past and this one isn’t as old as they usually are, the photo above dates from 1965 I think, and it’s of my eldest brother. My mother took the photo, as you can see she didn’t manage to get his feet in it!

John was about 18 years old in this photo and he’s in full Highland dress. In fact he was on his way to being part of the guard for the Queen’s visit to Dumbarton, where she was officially opening the town’s new County Buildings. There is a photo somewhere of the Queen inspecting the guards and it was taken just as she was walking towards my brother, so she is right next to him. It was taken by the local newspaper’s photographer and my mother had it framed and it sat on top of her display cabinet for years, but it has gone AWOL at the moment.

I was only about 6 years old at the time but I can remember the excitement quite clearly. My brother was in the Territorial Army which is the equivalent of the US National Guard I think, and they had all been given this very splendid dress uniform to wear for the occasion. However they were warned not to put anything in any of their pockets or even in the sporran. I suppose those in command didn’t want any unsightly lumps appearing in the pockets.

The upshot of that was that when my brother got back home after the ceremony he was locked out as everybody was either at work or at school. He used his initiative and went around to the back of the house where he managed to push the top sash of the kitchen window down and climbed in that way.

Unfortunately someone in one of the houses which you can see behind him saw him climbing in and phoned the police to report a burglary! Honestly how daft can you get – as if anyone would break into a house in a full Highland kit.

Anyway the cops duly appeared and my brother had a hard time convincing them that he was a legitimate member of the household. When the rest of the family heard about it we thought it was hilarious.

One other thing which sticks in my mind was that according to my brother they were ordered not to wear any underpants under their kilt -and they were inspected before being allowed to go on parade. Did they have to lift their kilts up I wondered!! No, apparently someone had to go along the lines with a gadget like a car wing mirror on a stick and poked it under the kilts, just to check that they had all obeyed orders and were properly dressed kilted Scotsmen. He swears that it is true but I’ve never been too sure about believing it!