The Brandons by Angela Thirkell was first published in 1939 and this was a re-read for me which is something that I don’t do all that often, well I have so many unread books to get to, but as I read this Barsetshire series out of order originally I’ve always intended to re-read them all again in the correct order. I must say that it was a real treat to be back in Barsetshire, absolute comfort reading which was just what I needed.

The Brandon family consists of Mrs Lavinia Brandon, her daughter Delia and son Francis. Mrs Brandon was widowed early on in her marriage and she seems to have found her situation to be a comfortable one, she has a lovely home and no money worries, she writes popular books. Her long dead husband is used to express what she claims would be his disapproval now and again. She’s regarded as a bit of a silly fool and admits to that but in reality she’s often surprisingly astute.

Mrs Brandon’s very elderly and wealthy Aunt Sissie has been on her last legs for years but now she’s bedridden and is concerned with her will. She’s threatening to leave everything to Francis, but another relative has appeared on the scene. Cousin Hilary Grant is unknown to the Brandons but when they all meet they get on well and as neither Francis or Hilary wish to inherit ‘Nightmare Abbey’ Aunt Sissie’s will holds not a lot of interest for them. They all feel sorry for Miss Morris though, she has had the job of looking after Aunt Sissie and it obviously isn’t an easy task.

As you would expect from a Thirkell book there’s a lot of silly chat and snobbery and I find that amusing but not everybody appreciates that sort of thing. The editor and author Diana Athill seems to have really despised Thirkell’s books – and the sort of women who read them, but maybe she just didn’t have much of a sense of humour! 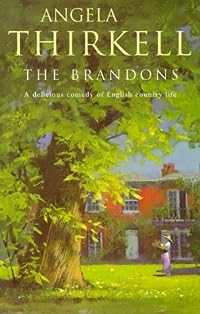 As I said earlier, I really enjoyed this book and can’t wait to get my hands on anything else that she has written, I might have to be patient though as they don’t seem to be easy to come by.

The Brandons is set in 1939 in Barsetshire, Anthony Trollope’s fictional creation and has that lovely 1930s atmosphere permeating the whole book. Pre-war comfort with wealthy people having plenty of servants who are often the ones in charge of everything. It reminded me of E.F. Benson’s Mapp and Lucia books although it doesn’t have the acid wit of those, and Richmal Crompton’s Just William ones, except for adults. Niranjana (Brown Paper) I think you would really love Angela Thirkell, but maybe you’ve already read her.

Lavinia Brandon was widowed after only a few years of marriage and has been left with a young son and daughter, a large house and plenty of money. Now Delia and Francis are young adults but they still have Nurse looking after them because their mother couldn’t ask her to leave. Nurse seems to spend her time making knickers for Delia and talking about them in front of the vicar. Mrs Brandon charms everyone she comes into contact with but the book is full of likeable characters.

It’s all vicars, church fetes, golden summer days and a great aunt who is always going on about her will. Very English, quaint and twee but hilarious at the same time and it just makes you long for the past when life seemed to be so much more genteel.

In reality of course I would probably have got T.B. or rickets. But that doesn’t stop me from dreaming.

Angela Thirkell’s Books is a great web site which has information on all of her books and I can see that I’m going to have to print it out and carry it around with me when I’m out book hunting.

Just a quick one tonight, I’m about 100 pages away from the end of this book but I want to say a big thank you to Joan Kyler who pointed me in the direction of Angela Thirkell. I’ve been having a thoroughly enjoyable time with The Brandons, a lot of the time I’ve been reading away, aware that there’s a big smile on my face but there have also been real laugh out loud moments. That doesn’t happen too often in my experience.

I want to get back to it now and I hope I’ll be able to say a bit more on the subject sometime tomorrow when I’ve finished.