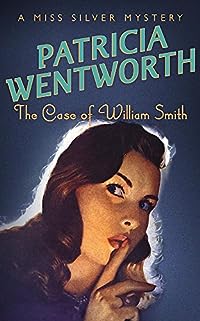 The Case of William Smith by Patricia Wentworth was first published in 1950 and it’s a Miss Silver mystery.

William Smith can’t remember anything that happened to him before 1942. His first memory is of being in a German hospital, and from there he was transferred to a concentration camp. The identity disc around his neck says William Smith. In the camp he strikes up a friendship with a Czech prisoner who teaches him how to carve small wooden toys and when William eventually gets back to London after the war his talent is spotted by Mr Tattlecombe, a toy shop owner who takes William on as an employee. Mr Tattlecombe’s son had been in the concentration camp with William but he had died there and to Mr Tattlecombe William had begun to take the place of his dead son.

When Mr Tattlecombe is involved in an accident William takes over the running of the business and takes on a female sales assistant. There’s a bit of a mystery as to why she wants the job at all, but William seems keen on her and when ‘accidents’ continue to occur it’s Miss Silver with her gentle cough who comes to the rescue.

I liked this one a lot, it has likeable main characters, twists and turns and Miss Silver sorts it all out as she knits two pale blue coattees for a baby and then begins on a cherry-red cardigan for the mother. She’s some woman!