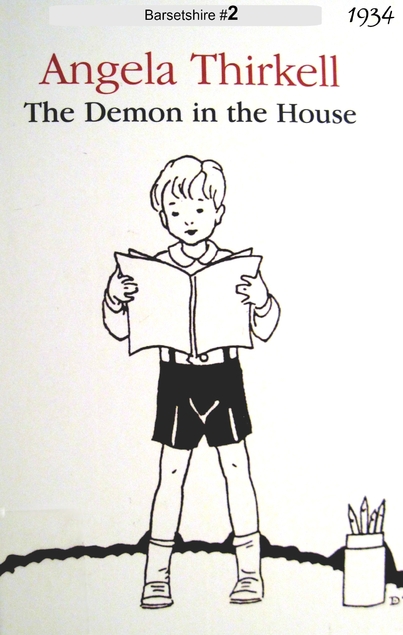 The Demon in the House by Angela Thirkell was published in 1934, a busy year for the author it would seem. She so fell in love with her character Tony Morland who first appears in High Rising – that she had to write more about him. He is of course the twelve year old son of Laura Morland who is a writer, it’s difficult not to assume that the Morlands are based on Thirkell’s own family.

This was a first time read for me as I had trouble finding a copy to buy at what I regarded as a reasonable price, luckily I managed to borrow it from the library, albeit in large print.

As the youngest of Laura’s four boys and never having known his long dead father, Tony is rather pampered, but he’s an exuberant lad, always getting into scrapes, breaking windows, ruining clothes, washing the newly shelled peas down the sink, retrieving them from the u-bend and eating them! You get the idea, he’s a bundle of trouble but at the same time adorable.

This portrayal of the relationship between a young boy and his mother is by far the most realistic I’ve read, despite Tony’s exaggerated character. Every bike outing of Tony’s has Laura imagining the worst. At the end of the book she is sorting out the clothes for his school trunk, he’s moving up to the senior school and going from short trousers to long ones, a huge rite of passage for boys and mothers in those days.

What really surprised me about this book is the many mentions of Hitler. Tony says Hitler murders practically all Germans. He knows what he would do. He’d put an electric shock machine in his telephone and when Hitler answered the telephone he’d get electrocuted. If only it had been that easy.

I read this one for the 20 Books of Summer Challenge.