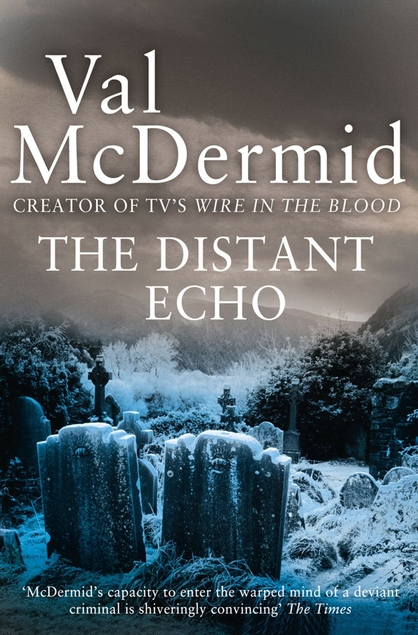 The Distant Echo by Val McDermid is the first in her Karen Pirie series, but she doesn’t turn up in this book until nearer the end of it when she’s been given the task of investigating a cold case going back 25 years or so to 1978.

The action begins in St Andrews, Fife, around the Christmas holidays where four male students are out celebrating at a local pub. It’s freezing and snowy and on the way home they stumble across a woman who is breathing her last in the snow. She has been stabbed and there’s blood everywhere.

The local police seem determined to pin the murder on the students who are almost locals and are known as ‘the lads fi’ Kirkcaldy’, another town in Fife about 20 miles from St Andrews. The ‘gentlemen’ of the press are quick to be judge and jury, so suddenly the four witnesses are suspects and everyone is turning against them.

The action moves on to 25 years later when the ‘lads’ have settled in their various occupations, but the past catches up with them unexpectedly and the nightmare begins again.

This is the first book by McDermid that I’ve read, apart from her Jane Austen re-write of Northanger Abbey. I was quite surprised by it, mainly because I had it in my mind that her writing would be a bit more cerebral – silly of me really as probably if it was then her books wouldn’t sell as well as they do.

I found this book to be just an okay read, I’ll probably give it three stars on Goodreads, but I suspect that most of my interest in it depended on me living close to all the locations and knowing the areas involved so well. McDermid even mentions a woman that I knew when I lived in Kirkaldy and she has her characters walking around so many of the local roads where I lived until recently.

I really had to suspend my disbelief towards the end of the book and I don’t think it’s fair when an author withholds information from the reader in the way that McDermid did – but maybe that’s just me being picky.

I’ll probably give the next one in the series a go to see if the Karen Pirie character grows on me, but so far McDermid has been a bit of a disappointment.