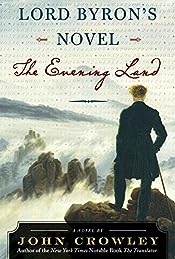 Lord Byron’s Novel The Evening Land by John Crowley was published in 2005 and it was Jack who recommended that I read it. This is the first book by John Crowley that I’ve read and it’s fair to say that although I quite enjoyed it, I wasn’t as enamoured of it as Jack was. You can read his review here.

Apparently when Lord Byron died his estranged wife told their daughter Ada Byron (Countess of Lovelace) to burn a lot of his papers which included a novel that the he had written but never had published. This Crowley novel imagines that Ada couldn’t bring herself to destroy his novel so being an absolute whizz at things mathematical she transcribed the entire book into a secret code. When Byron’s papers turn up in an old trunk in an English storeroom there’s huge excitement among some academics and interested parties who have found out about it, so The Evening Land is interspersed by emails between a few people who are unsure whether the papers are genuine or fake.

Eventually one of them cracks the code and The Evening Land – a fairly autobiographical novel ensues.

This book is well written but I’m not keen on the whole idea of people writing in another novelist’s name. To me it’s just too much of a liberty, but that’s probably just me being too serious and po-faced about what is after all a piece of entertainment.

Make sure you click the link to read Jack’s very different thoughts on this book.