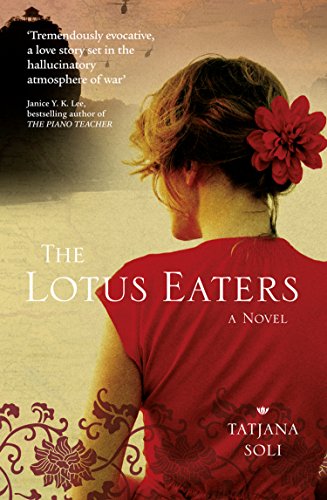 The Lotus Eaters by Tatjana Soli won the James Tait Black Memorial Prize in 2010. If it hadn’t won that prize I doubt if I would have picked the book up because the subject matter didn’t really appeal to me, but I ended up really enjoying this book which was quite a surprise to me.

The book begins on April, 28th 1975 with Helen Adams picking her way through the streets of Saigon. The long war is coming to an end. There’s a lot of looting going on in the centre of town, it’s time for her to leave the city and go home, but she wants to hang on and be the last photographer to leave, she’s sure there are still great photo opportunities for her.

Ten years earlier she had decided to go out to Vietnam to become the first female war photographer there, she was totally clueless. She wore suede high heels and only had an instamatic camera so had never even loaded film into a ‘real’ camera. She had been drawn to go to the war zone because her younger brother had been killed there, she wanted to find out how her brother had died if possible, but it was also partly because she had always been infuriated by the way she had been left out of things by her father as he took her brother out with him to do father/son bonding things, such as hunting. She felt she had some catching up to do.

The male photo journalists weren’t happy about her being there, nor were the combatants, but Helen hung on to Sam Darrow’s coat tails and learned the job from him. From Linh his assistant she learned Vietnamese, something that the others didn’t bother to do.

This is a love story of sorts although the obsession with getting good photos that tell a story and will be of interest to the folks back home as well as the editor of Life magazine becomes paramount. Like others before her Helen is loth to leave and go home to a mundane life, she’s become a bit of an adrenalin junkie despite her terror as she accompanies the soldiers on patrols. The love interests didn’t ring quite true for me, but that’s me nitpicking.

Despite the descriptions of violence and the horror of the war this is a really good read, very atmospheric. It’s the sort of book I would normally avoid, simply because the setting is in such a steaming hot country – daft I know but I prefer books set in cold countries – but I’m really glad that I read this one. It’s quite amazing to think that this was her first book. It is so much better than the last James Tait Black prize winner which I read (Personality by Andrew O’Hagan).

I was also impressed by the two pages of bibliography which Soli listed at the back, she certainly did her homework.