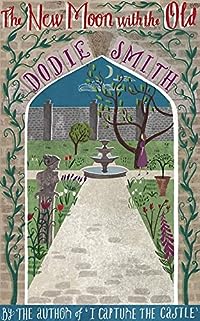 The New Moon with the Old by Dodie Smith was first published in 1963 and of course the book has the usual – by the author of I Capture the Castle printed on the front. That of course is her best known and well loved book, but I’ve read a few of her books now and I think they are just as good if not better than that one.

There were quite a lot of things that could be fairly annoying about this book but for me anyway it overcame those.

It’s the 1960s and the book begins with Jane Minton arriving at Dome House where she has been sent to take up the post of secretary-housekeeper. Her employer is to be Rupert Carrington, and the only downside of the job for her is the fact that she is going to see very little of him as he will be spending most of his time in London. She rather fancies Rupert.

Rupert is a widow with four children ranging in age from 14 to 24. He’s a wealthy businessman and they have all lived a very comfortable life. Dome House may be an old house but it’s obvious that nothing has been stinted, it has central heating and fires and all mod cons. At breakfast everybody has their own electric toaster on the table in front of them.

None of the children is out in the world and so are contributing nothing to the household, so when their father Rupert has to leave the country fast due to him being involved in dubious business dealings, and suddenly the money tap is turned off, they are in dire straits.

All of the Carrington ‘children’ lean towards the arts, one being slightly arty, one musical, the youngest plans to go on the stage and one wants to write books. But suddenly they have to get serious and look for real jobs that will bring in some money. The arty girl’s real ambition is to be the mistress of a king! She thinks that she might be quite good at that. The only one with any real talent seems to be the youngest, she is such an actress already and she is the first to try to find work despite being too young to leave school.

After a brief spell of austerity when their old cook and housekeeper are even out working in the local pub to help keep the house going, they all do more or less fall on their feet.

I really enjoyed this book, as much as, if not even more than I Capture the Castle. I have to say though that there are lots of things about it that should really annoy me. Rupert Carrington is basically a ‘fat cat’ who has been ‘earning’ his money by buying firms and sort of asset stripping. His children are all fairly annoying with that sort of sense of entitlement that I hate, certainly to begin with, and they have charmed lives. In that sense it’s a sort of fairy tale. A good read.