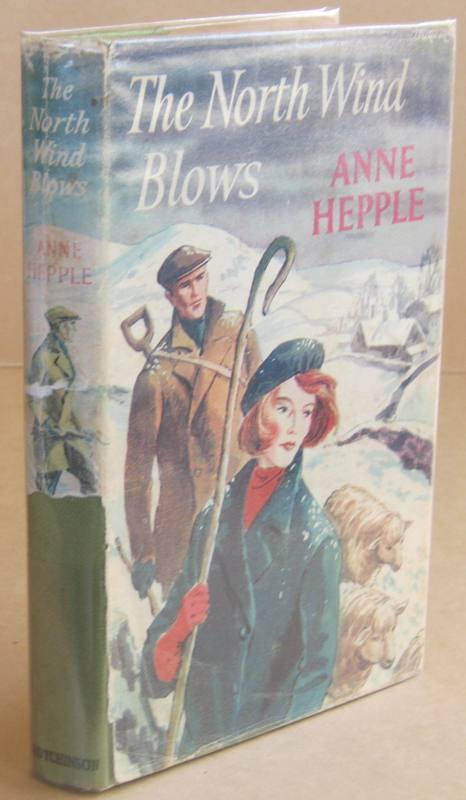 The North Wind Blows by Anne Hepple was published in 1941 but my edition dates from 1956 and it’s the first book by Anne Hepple that I’ve read. I’ll definitely look out for more of her books as I enjoyed this one despite it being fairly predictable romance wise.

Hetha and her mother have escaped from Austria where the Gestapo had shot Hetha’s Austrian step-father. In the mad scramble to get away Hetha’s identity papers have been left behind and her mother had stupidly written her daughter’s name down as Hetha Fischer – the step-father’s surname instead of Montrose as it should have been. On Paper Hetha is an ‘alien’ and she lives in fear of being deported or imprisoned. In an attempt to dodge the authorities she takes herself off to work as a dogsbody on a remote Scottish farm, she loves farm work and ideally would have wanted to join the Land Army, if she had had her own papers.

The farm she works on is owned by Drem but although he owns the land his step-mother has the money and owns all the stock and is furious that her own son didn’t inherit the farmland. The atmosphere on the farm is awful and Hetha is treated like a Cinderella, not that she minds as she enjoys the work and is just glad to be out of the clutches of the Gestapo and also the British police. The locals aren’t exactly friendly to Hetha and things get worse over time as rumours that she is a spy circulate the neighbourhood.

I think the storyline is very authentic as people in Britain did get a bit over-excited about any strangers in their midst, and let’s face it – there are always miserable people who choose to think the worst of anyone, especially if they’ve got a hint of anything different about them.

I’ve always preferred people who are different as they’re more interesting – to me anyway. What about you?