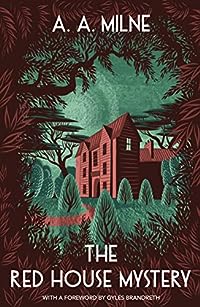 The Red House Mystery by A.A. Milne was first published in 1922, but I read a Vintage reprint which I managed to get through my library. Of course A.A. Milne is mainly known for his Winnie the Pooh books, which I love and it was only through reading blogs that I realised he had written this murder mystery.

The bloggers had all written glowing reports of The Red House but at first I wasn’t too sure about it. However once I really got into it it turned out to be a right good read. I didn’t manage to guess what had been going on which is always a plus for me as I do try to think ahead and work out the mystery.

The book begins: In the drowsy heat of the summer afternoon the Red House was taking its siesta. There was a lazy murmur of bees in the flower-borders, a gentle cooing of pigeons in the tops of the elms. From the distant lawns came the whir of a mowing-machine, that most restful of country sounds; making ease the sweeter in that it is taken while others are working.

So there we have the country house setting so beloved of mystery readers as well as murderers it seems. The owner of The Red House Mark Ablett fell on his feet when he was a young man as he had been left a large amount of money by a relative. His brother Robert was disgruntled to be left nothing as you can imagine, and the two had been on bad terms for years.

Fairly quickly a murder is committed (always best in my opinion, I hate a long run up to the crime) and one of the house guests and his friend take on the roles of Holmes and Watson in an attempt to solve the crime.

This one has some interesting characters, a good mystery and is well written with witty dialogue which reminded me in parts of Georgette Heyer’s in her murder mysteries.

In some ways it’s a shame that Milne’s Pooh books were so successful as they overshadowed this book and he didn’t write any more mysteries.