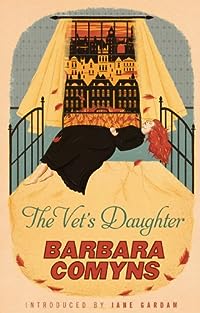 The Vet’s Daughter was first published in 1959 but I read a Virago reprint. It’s the third book that I’ve read by Comyns and I think that it is the one that I’ve liked least, although it seems to have been seen as something of a wonder when it first came out. It was apparently received with excitement, widely reviewed, praised by Graham Greene, reprinted, made into a play, serialised by the BBC and adapted as a musical.

It didn’t really appeal to me because I found it to be too dark and quite depressing. The story is told by Alice, the vet’s daughter, she lives with her parents in a poor part of London and her father is abusive, especially towards his wife. It’s a bit of a puzzle as to why he’s a vet as he has no love for animals, the vivisectionist arrives weekly to collect the unwanted puppies! Alice is just a drudge, having to clean out all the animal cages and run the house. Things just get worse as Alice’s mother suffers a lingering death, getting no sympathy from her husband.

He wastes no time in moving the local barmaid/tart into the house when his wife dies and so begins another round of misery for Alice as she has to clean up after the tart and her father’s moods are no better, he’s still a raging drunk who enjoys beating up his daughter.

There’s a brief respite for Alice when she moves away to the countryside to be a companion to an old lady, the mother of her father’s assistant. But that ends in tragedy too. Comyns has a thing about floating, I seem to remember that in Sisters by a River there was one of them who often seemed to float upstairs, or so she thought anyway. Something similar happens in this book too, but it has dire consequences. I found it to be an odd book. It happens to have been ‘born’ the same year that I was born and back then it may have been seen as quite fantastical which might account for it being so well received, but for me it just seemed a bit of a downer.