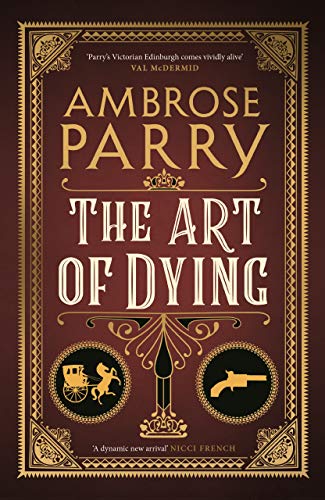 The Art of Dying by Ambrose Parry was first published in 2019 and it’s a sequel to The Way of All Flesh. The setting is Edinburgh 1849 where Doctor Will Raven has arrived after spending some time in Germany. He has returned to become assistant to the famous Professor Simpson and is looking forward to seeing Simpson’s housemaid again, he and Sarah had had a bit of a dalliance, but Raven hadn’t been able to stomach the thought of marrying a housemaid, albeit one who has a deep knowledge of medicine and herbs as Professor Simpson was happy for her to read his medical books and help him in his clinics. Raven is somewhat mortified to discover that another doctor hadn’t been so and so Sarah is now a doctor’s wife.

Raven realises that people within the city are dying, whole families within days of each other and he’s hoping that he will be able to prove that it’s a new illness that’s killing them, it would be a great thing for his reputation and career. He and Sarah team up to do some investigating. Meanwhile Professor Simpson’s reputation is being attacked by some of his colleagues, the medical profession is a dirty one with a lot of metaphorical knife sharpening going on.

Will and Sarah are determined to protect him, but Will is again in trouble with the local moneylender, something that he thought he had seen the end of previously.

I’ve really enjoyed these books which have a great atmosphere of old Edinburgh, from the lowest of the low in the Old Town to the wealthy and well-known inhabitants of the New Town.

It would seem that nothing much has changed when it comes to ambition within the medical profession – for some people anyway as I was reminded of that English doctor some years ago who was so determined to enhance his reputation and make a name for himself that he ignored anything in his research that didn’t fit in with his own theory. Which would have been harmless I suppose except he terrified some parents into refusing to get their children vaccinated against serious childhood diseases. I believe that after being dealt with in the UK he has moved on to the US to do the same thing, so endangering the lives of loads of children. Thankfully Will Raven is made of different stuff!

I thoroughly enjoyed The Way of All Flesh by Ambrose Parry. The setting is Edinburgh in 1847 where Will Raven feels lucky to have secured an apprenticeship with the famous Doctor James Simpson, he has moved into the Simpson family home and his scruffy appearance doesn’t go down well, especially with the servants there. A close enounter with a money lender and his gargantuan enforcer ensured that Will looks even worse than usual. He’s so glad that he’s now living in the New Town rather than the Old Town where his assailants are more usually to be found. However he soon discovers that when accompanying Doctor Simpson on his rounds they are often in the Old Town. Will had thought that Simpson would be working mainly with the wealthy citizens of Edinburgh, but often he’s attending poor women who are having difficulties in giving birth. Simpson has been using ether to help them with their labour but he is looking for something better and safer.

Will is also searching for something – he wants to find out what happened to his friend Evie who he found dead. She was a prostitute and when he found her she had obviously suffered a violent and painful death, and it seems that she’s not the only young woman to have died like that recently.

This is a great read, I loved being back in Victorian Edinburgh. Ambrose Parry is the name which has been adopted by the author Chris Brookmyre and his wife Marisa Haetzmen who is a consultant anaesthetist and they used the research which she had done for her Master’s degree in the History of Medicine as a base to weave the tale around. They’ve also nodded towards the Frenchman Ambroise Paré who was a pioneer of early surgical techniques. Apparently this is the first in a series, I’m really looking forward to the next one. The endpapers have a lovely map of Edinburgh to help those who don’t know the city to see where they are.