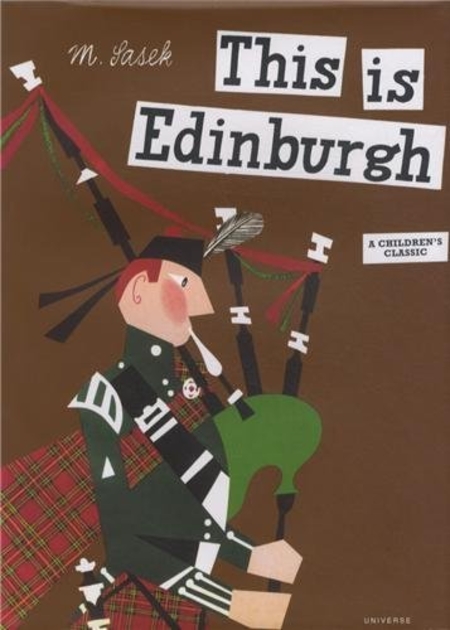 This is Edinburgh by Miroslav Sasek was first published in 1961 but my copy is a 2006 reprint. I swithered about buying this one, I already have so many books for children but the illustrations are so charming and as I flicked through it I saw the iconic Jenner’s department store building – that swayed me to definitely buy it. I’ve been told that Jenner’s is going to be shut as a store and converted into posh apartments, so it’ll be nice to have it still as it was within the covers of this book.

This is a lovely volume which features many of the places that tourists want to see when they visit the city – Edinburgh Castle, St Giles’ Cathedral, Greyfriars Bobby and Holyrood Palace, but also the more out of the way places such as Dean Village, which I love. The famous penguin parade at the zoo is depicted, although since the pandas took up residence the penguins haven’t been the main attraction that they once were, much to their chagrin, but they started getting their own back by aiming their poo at the waiting visitors!

From The Times, 2011: Penguin poo hits the fans in panda queue

They arrived at their new home in a police cavalcade, having touched down in a private jet, so it was perhaps inevitable that the UK’s only pair of giant panda would ruffle the feathers of their neighbours at Edinburgh Zoo.

According to keepers, the penguins who live upstairs may be suffering from “monochrome jealousy” of Tian Tian and Yang Guang. Eschewing traditional housewarming gifts, the rockhopper penguins are targeting the visitors queueing up to see the pair with droppings.

There is a news video from 2011 about the jealous penguins here.

Of course the pandas don’t feature in this book as it dates back to 1961 with just a few wee updates at the back of the book.

You can see a lot of the illustrations in this book here.

The author first wrote This is New York and This is London before turning to Edinburgh. It’s a children’s book to be enjoyed by all ages.