The old building in the photo above is situated at the east end of Kirkcaldy High Street. It must be one of the oldest buildings in the town and a few years ago it was buffed up and refurbished, as was the building adjoining it on the left hand side.

Unfortunately as you can just see the guttering on the left hand building is badly in need of repair as it’s obviously leaking into the traditional lime plaster and must be causing damage to the fabric of the building. It looks a lot worse on the far left but I’ve spared you that sight.

The plaque above is also in Kirkcaldy High Street, unfortunately Adam Smith’s family home was demolished many years ago. This is a depressing feature of Kirkcaldy life. Anything which would have been of interest to tourists has been pulled down, and they did have houses which people would have wanted to visit.

Within a stone’s throw of each other there was the Adam Smith house, Thomas Carlyle’s home and the school he taught in and Gladney House, which was the home of the famous Robert Adam and his brother John. Their father was also a famous architect, William Adam.

On a cheerier note the town is refurbishing an old cottage which is situated behind the High Street and I believe that the powers that be intend to turn it into an Adam Smith museum. I just wonder what they will fill it with as I think they only have a copy of his book Wealth of Nations on show at the moment.

It’s amazing what you see when you’re walking to the supermarket, if you happen to be in the Stockbridge area of Edinburgh (again). I was admiring the gardens, there were quite a few viburnums blossoming, when I noticed that one of the terraced houses had a sign above the fanlight. Thomas Carlyle lived here – or words to that effect. It’s a very nice terrace but being Edinburgh the houses will cost an arm and a leg, even without a famous author as a past inhabitant. I love the fanlights above the doors, there are so many different designs. I just wish the present inhabitants would cut their climbing rose back a wee bit. It’s great that the window shutters are still in working order too, most of the houses seem to have internal shutters. It must make it nice and cosy, especially when there’s a howling gale. They would also be handy for keeping the early sunlight out in the summer, it’s no fun trying to get to sleep when there’s bright daylight outside at about 3 or 4 in the morning. The house next door to Carlyle’s has quite an unusual fanlight (the window above the door). It would make a good pattern for a patchwork quilt, if you’re of that band of crafters. Carlyle lived in Kirkcaldy for a couple of years when he was teaching here but the powers that be pulled the place down years ago. You can see the street that it was in in a previous post here.

So what were we doing in Stockbridge? It wasn’t my fault (it wisnae me). Jack wanted to go to buy a book he had seen there a few weeks ago and hadn’t bought because he thought he already had it, he was wrong, luckily it was still there. He bought Space Chantey by R.A. Lafferty and The Ladies of Grace Adieu by Susanna Clarke.

I ended up buying Mary Stewart’s The Ivy Tree and a 1934 copy of Priorsford by O. Douglas. Neither of them had been there a couple of weeks ago. That particular shop must have some turnover of books because they all seemed to be different this time.

Why was I at Waitrose? Buying more scone ingredients of course. Fingers crossed and ever hopeful that I can produce something good enough to photograph next time!

Despite the fact that we were being blasted to bits on the tower parapet we both managed to take quite a few photos. I like old graveyards and it was interesting to see this one from above. You can see that there is quite a lot of space given to each lair. I think some of the gravestones have disappeared over the years but even so when you compare it with the graveyard at the Bronte Parsonage in Haworth which is absolutely crammed with graves it’s easy to see how they got into trouble there.

You can just see what was the original manse at the top left of the photo. They have a huge garden and typically it’s all just grass. Why is it that non-gardeners always get the biggest gardens? It’s one of those ‘sod’s law’ things! This cute wee turrety building is in the grounds of the church. I don’t know what it’s used for now – if anything, but I think originally it must have been inhabited by whoever looked after the church and graveyard or maybe the session clerk. As you can see, it’s quite a long way down from that tower.

Across from the house you can see a hideous cream coloured building which was built some time in the 20th century. It replaced the school and house where Thomas Carlyle lived and taught for a couple of years. And this is another one of the memorial stained glass windows. Photos don’t really show up how beautiful they are.

This is the Old Kirk from the bottom of Kirk Wynd and the turrety building, you can see the parapet which I took the photos from. If my scribbled list is correct, I managed to read 81 books in 2010. Well, that might be me cheating a wee bit because I’ve still got about 100 pages of War and Peace to read, but the vast bulk of it has been read in 2010 and I’m giving myself loads of ‘Brownie points’ for getting around to reading it at last. Yes, I ended up being the Sixer of the Kelpies (Sprites) – if that means anything to anyone!

Authors whom I’ve enjoyed reading and were new to me this year are:
Willa Cather, Paul Auster, Annie Proulx, Barabara Kingsolver, Rosamunde Pilcher, Rosy Thornton, Zola – in fact there are too many to mention, so it’s been a really enjoyable reading year.

It’s all thanks to the recommendations of bloggers and commentators. I wouldn’t have got around to reading half of the new authors otherwise. I can hardly believe that I’ve actually read a book by Thomas Carlyle – Sartor Resartus, definitely different but surprisingly fairly readable.

This year I’m trying to read a lot of the books which I’ve had in the house waiting to be read for years. Then I can either pass them on or pack them away when I’ve finished with them with a view to clearing some book clutter prior to downsizing. I am actually tripping over books! 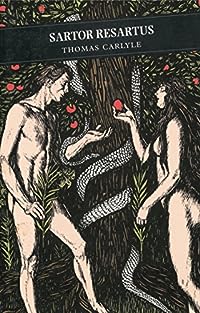 Stefanie at So Many Books got me thinking that I should read this book.
This is the first thing that I’ve ever read by Thomas Carlyle, which is a bit shameful really considering he lived and taught a stone’s throw from where I live. I had always thought that his writing would be very dry and boring, he sounded like one of those old Scots curmudgeons to me, but I was pleasantly surprised. There’s a lot of humour in Sartor Resartus which is apparently his protest against Materialism, and it only occasionally descends into thou-ing and thee-ing, which I can’t really be doing with. The title means ‘the tailor patched or remade’ and although it’s written about Professor Diogenes Teufelsdrockh (which translates as god-made devil-dung) a German from the University of Weisnichtwo who has written a Philosophy on Clothes with Carlyle as his editor or patcher, introducing Teufelsdrockh’s work to the British public. In reality Teufelsdrockh’s experiences are Carlyle’s.

Carlyle was born in the very small village of Ecclefechan in the south of Scotland and having been there to see his birthplace I can see why he wanted to leave, there’s just nothing there and in fact the name of the place sounds strange even to Scots. I can imagine that when he told people where he came from, nobody actually knew where it was, which is why he gave Teufelsdrockh’s town the name of Weissnichtwo, which translates as Know not where. That’s my theory anyway but Wikipedia doesn’t agree with me.

Although this book was written in 1832 it’s amazing, and sometimes quite depressing how little some things have changed. On page 93 he writes: His first Law-Examination he has come through triumphantly; and can even boast that the Examen Rigorosum need not have frightened him: but though he is hereby an Auscultator of respectability, what avails it? There is next to no employment to be had.

This was obviously Carlyle’s experience and the reason why he ended up teaching in Kirkcaldy which he managed to stick out for just a few years, which isn’t surprising as he wrote this:
Among eleven-hundred Christian youths, there will not be wanting some eleven eager to learn. Which is presumably why, like many a Scot before him, he left Scotland to find fame and fortune in London.

Okay, so I admit it, I haven’t quoted any funny bits, but they are there, honestly. One thing that really annoyed me about the book is the use of the word English, which is often used when the word should be British or even Scottish. This must have been an editor re-writing Carlyle as no Scotsman would have done it. The author Smollet is even described as English! Or was it Carlyle posing as an English editor? Who knows. The structure of the book is multi-layered, but if Carlyle did mean to write English when it should have been British or Scottish – then he took it too far.

Apparently Dwight Eisenhower kept a copy of this book with him from 1942-1945 while commander of AEF and noted ‘It is a wise man who has read this masterpiece and acts upon its call.’ Adolf Hitler was reading Carlyle’s biography of Frederick the Great in 1945. Carlyle’s distaste of democracy and his belief in charismatic leadership obviously appealed to Hitler. Well nobody’s perfect!

The powers that be in the shape of ‘the toon cooncil’ demolished the building which was the school that Carlyle taught in, and replaced it with a 1970s horror. So the only thing which I could photograph is the other side of the street, which they daren’t pull down as it is The Old Kirk and this is the street which Carlyle would have walked down every day on his way to work, and the view which he would have had from his classroom window.

I got a phone call from my local library yesterday morning to let me know that the book which I had requested was waiting for me to collect it. As I didn’t have much planned for the day I thought I might as well go and pick it up. So I now have Thomas Carlyle’s Sartor Resartus to plough through.

Saturday afternoon turned out to be a good time to visit the library as there were quite a lot of good books on the shelves, my last visit had been a fruitless one.

Well, I’m hopeful that it’s a good haul anyway. The only downside of this is that I won’t be making any more dents in my TBR pile at home. I had been doing so well too.