There’s been a bit of a hoo-ha recently because the makers of Toblerone have changed the design of it as a cost cutting exercise. Now the triangles are gone and Toblerones resemble a toast rack as the gap between the chocolate is so large you could slot a piece of toast in between them. I’m not a big fan of Toblerone so I wasn’t too bothered by that change. You can see the differences here.

However I’ve always loved Terry’s Chocolate Oranges and last night I was settling down to watch the new Danish crime programme Modus when I decided it was time to have a wee bit of chocolate to go with the murders! My chocolate tin (old shortbread tin) was unusually bare, but I always put chocolate oranges into peoples’ Christmas stockings so I had a stash of them already bought. Well – needs must, and I broke into one of them.

After tapping and unwrapping I didn’t pay much attention to the segment as I put it into my mouth – well you have to concentrate on the screen when you’re reading subtitles. But my tongue discovered that there was something definitely different about it. I examined one of the segments and saw that the design has been changed completely. Previously each segment had always been completely flat and closely interconnecting with all the others in one complete sphere with just the word Terry’s inscribed in the chocolate. 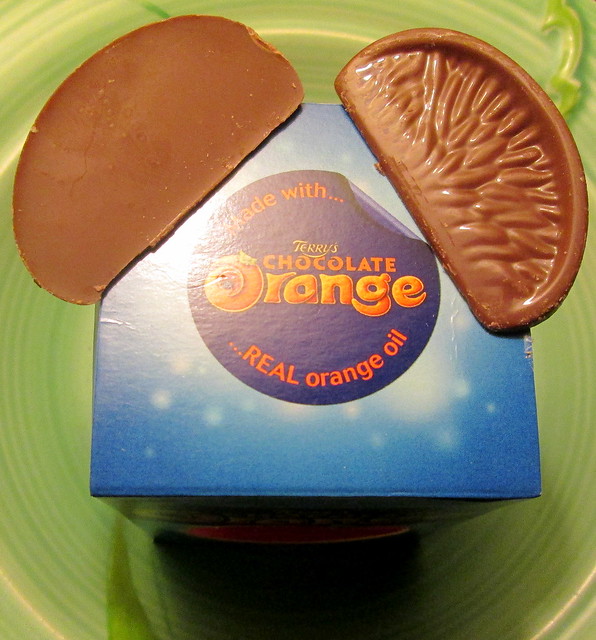 Now as you can see from the photo I took each segment is only flat on one side and the other side has a fancy design on it, meant to look like an orange segment no doubt, but the upshot is that it is concave which means a lot of chocolate is missing!

The weight on the packaging says 157 g. They used to be 175 g. This is just an absolute con as the package is the same size as normal but the contents are much less, making a bigger profit for the manufacturers. This is the sort of thing that happens when companies are sold on to multinationals. I’m disgruntled, but at least so far they seem to be using the original ingredients. I’ve just discovered a Telegraph article about it which you can read here.

Terry’s chocolate was one of the several manufacturers set up by various Quaker families who wanted to have businesses that did no harm to humans and were entirely peaceful. Cadbury’s are apparently no longer using Fairtrade chocolate but are still using the Fairtrade logo. These business folks obviously feel no shame, whatever makes a bigger profit is acceptable in their world. The Quaker families will be birlin’ in their graves! I just knew that when Mondelez International took over these businesses it wasn’t good news.