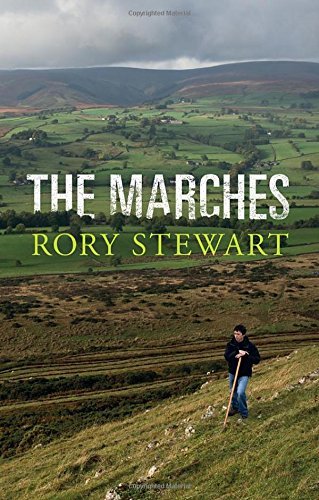 The Marches Border Walks With My Father by Rory Stewart was published in 2016. It’s a mixture of history, geography and personal memories and meanders through various topics. The original plan was that Rory Stewart and his elderly father would have a last long walk together, the length of Hadrian’s Wall, but it was soon obvious that his father Brian Stewart didn’t have the stamina to do much walking at all, so the plan had to be changed. This is the story of Rory Stewart’s 600 mile, 30 day journey along the length of Hadrian’s Wall and then north up to his father’s house in Crieff, Perthshire – the beginning of the Scottish Highlands. From time to time his father drives to meet up with him and we’re told a lot about Brian Stewart’s wartime experiences and his subsequent career as a British colonial official and then an intelligence officer, apparently the equivalent of ‘Q’ in James Bond terms. His father was very proud of his Scottish heritage, but sounded so southern English as they both constantly call each other ‘darling’. The closest a real Scottish man of his father’s vintage would have come to a term of endearment to his son is – son.

There are a lot of references to Rory Stewart’s time in Afghanistan, but on his walk he meets up with a lot of people as he criss-crossed the Borders several times on his route. I enjoyed his meetings with people and the landscape, but then he mentioned a ‘fact’ that I knew for certain was wrong, and that made me question the entire book. He writes: I was now standing up to my waist in the water that marked the line of the final break between the kingdoms of England and Scotland. In 1286, racing to visit his mistress, the Scottish king had fallen from a cliff….. Wrong! The king was King Alexander III and just about everyone must know that he fell off his horse and died just outside Kinghorn in Fife in 1286 when his horse stumbled in the dark as he was riding home to his wife during bad weather. There’s even a monument to mark the spot of the disaster. I posted about the monument here. No cliff involved – no mistress involved and the nearest water is the Firth of Forth not the Solway Firth which is the water that Rory Stewart was standing in.

When writing about the WWI munitions factories he tells how many Germans were probably killed by the dynamite manufactured there, perhaps hundreds of thousands, but neglects to mention the women who made the stuff and often died lingering deaths from the close contact with cordite, and often were blown up in accidents during the process.

He got William Wallace’s execution wrong too.

Apart from things like that Stewart’s political opinions got in the way, and they’re unsurprising for a Conservative. He’s against re-wilding and all for intensive farming.

He seems disappointed when he says that:
I had been walking for twenty days through one of the most remote, sparsely populated parts of Britain, and I am yet to meet anyone who has not travelled outside the United Kingdom. Nine out of ten people had apparently not been born in the village in which they now live. But almost everyone insists on their ‘local’ heritage.

That gives the impression that he expected the plebs to stay where they were born and have no inclination or ability to move or better themselves – or take a foreign holiday.

He’s surprised to meet people who are proud to be honorary Scots despite having been born in England or elsewhere, these people often turn out to be more Scottish than the Scots. It has always been like that and we welcome them all, so long as they embrace our culture and don’t try to change us. It’s strange that he’s surprised by this as since he became an MP for a Cumbrian (north of England) constituency he has obviously fallen in love with Cumbria (for the moment anyway) and if he said it once he must have said it five times – The Cumbrian author George MacDonald Fraser. That author may have been born in Carlisle but I’m sure he regarded himself as a Scot.

As you can see the book annoyed me in parts, not least because of the emphasis on his father with little mention of his mother, however he did mention at the end that his wife and his mother had wanted to keep a low profile so that’s fair enough.

I think what it comes down to is that people who have been ‘brought up’ by their boarding school instead of their family never shake off that upbringing and it has the most influence on their character. Rory Stewart went to Eton – and it shows.