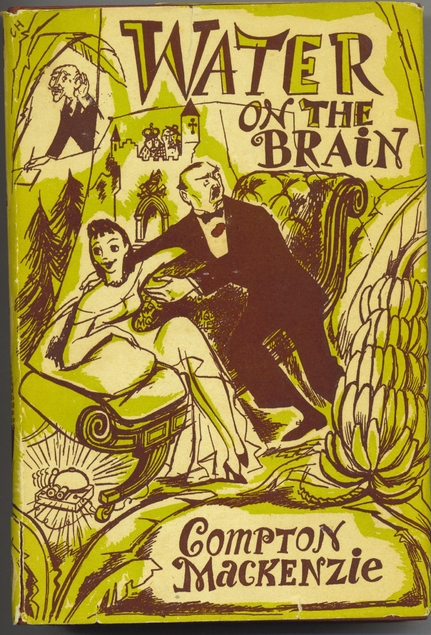 Water on the Brain by Compton Mackenzie was first published in 1933 but my copy was published in 1954 and the author had added a preface explaining that the book had been written just after his trial at the Old Bailey under the Official Secrets Act. Mackenzie says that in 1933 the book must have seemed like something out of a Marx Brothers film, such was the craziness that those in ‘Intelligence’ got up to. But he thinks that post World War 2 many people who had come into contact with the Intelligence Services would have recognised the types of characters involved.

The book had me laughing out loud quite a lot, it’s a hoot. Of course it counts towards the Read Scotland 2016 Challenge, my tenth Scottish book this year.

The action begins in London where a young army major, Arthur Blenkinsop is living with his wife in a service flat. He had seen action in World War 1 but since then he had been working in Mendacia, a small outpost of the British Empire. That job had come to an end when the local political situation changed, and back in London he is looking for work so he is delighted when he gets a letter from the Director of Extraordinary Intelligence asking him to call at the War Office for an interview.

Major Blenkinsop is such an idiot he’s taken on by Intelligence immediately and sent up to Scotland to try to broker a deal which would mean that the ex king of Mendacia gets into power again. Blenkinsop’s cover is that he is working in the banana business but his wife is suspicious from the beginning and she thinks he is having an affair. She follows Arthur up to the Scottish Hydro in the Highlands where he becomes involved with two elderly sisters who are English but are very aware of their Macadam forebears and are in Scotland for the first time ever. They get completely caught up in it all and believe that there is a plan to bring Home Rule to Scotland and that they can help.

It does indeed become something akin to a Marx Brothers film and as Compton Mackenzie was one of the founder members of the Scottish National Party and the powers in England were worried that it would become something like Sinn Fein in Ireland, it’s not surprising that people were keeping an eye on him.

I read this book and wrote the post quite a while ago and have only just realised that I didn’t get around to actually publishing the post.