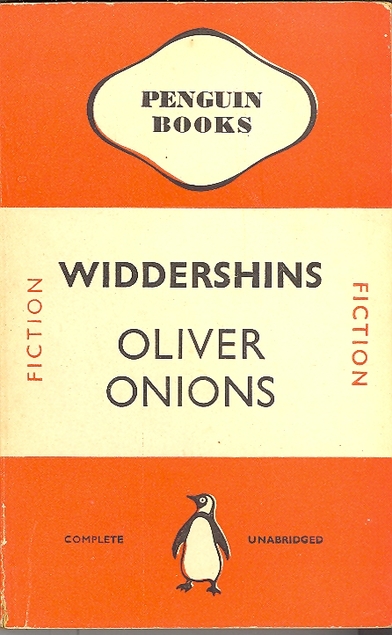 Widdershins by Oliver Onions is a book of eight short stories which was published in 1911 and it’s a collection of ghost stories. Oliver Onions was born in Bradford, Yorkshire in 1873, and he had a very long writing career. I don’t read short story collections all that often but I’ve inadvertently read two in a row now, I was under the impression this was a novel to begin with.

Ghost stories aren’t really my thing but Onions was definitely a good writer. The first short story The Beckoning Fair One is 81 pages long so is really a novella, and that is the one that I liked least. A man moves into an old house which has been lying empty for years and he seems to be taken over by a jealous malevolent spirit. It was a bit odd to be honest, but that’s probably the way of all ghost stories. This is apparently one of his best known and compares well with The Turn of the Screw.

I felt that the other seven stories were more successful though so this ended up being a good read.

The others are titled:
Phantas
Rooum
Benlian
Io
The Accident
The Cigarette Case
Hic Jacet

I would like to know how the title of the book was decided but we’ll never know I suppose. Widdershins or Withershins as it is sometimes spelled is the Scottish word for anti-clockwise, although I believe that the word is also used in astronomy.

Evee mentioned recently that she loved the Scottish word widdershins and I agreed with her, but I realised that I didn’t explain what it means, so here goes.

Widdershins or as it is sometimes written withershins is Scottish for anti-clockwise or counter-clockwise as some people say it. It’s sometimes used in astronomy as it literally means against the course of the sun.

Anything widdershins is deemed to be bad luck as witches were supposed to walk round their cauldrons that way, but we always go widdershins round the local park because it just doesn’t feel right going clockwise.

It was once used if you wanted to say that something is the opposite way of what is deemed to be normal, or as people tend to say nowadays – something which is counter-intuitive.