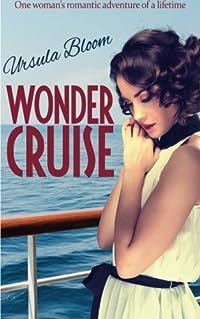 I was asked by the publishers if I would like to review Wonder Cruise by Ursula Bloom, apparently because I’ve reviewed some D.E. Stevenson books in the past. I jumped at the chance because I had read and reviewed an old copy of Mrs Bunthorpe’s Respects by Ursula Bloom. I like her writing, it’s funny but also well observed. She was very prolific, apparently writing over 500 books under various names, she was 92 when she died and she started writing at a very early age.

I was a bit put off by the title. Wonder Cruise sounds a bit tacky to me and Mills and Boonish and when I saw the book cover it didn’t make me feel any better. But I did really enjoy the book which was first published in 1934.

Ann Clements is a 35 year old spinster, she was brought up in a country rectory, a very sheltered and quite boring life, her mother died when Ann was only eleven so Ann had taken over many of a vicar’s wife’s duties. Her brother is an evangelical vicar, he’s married with one daughter Gloria, Ann’s goddaughter and they live in London. When her father dies Ann realises that she has to find a way of supporting herself, the proceeds of the sale of the rectory furniture allow her to take a secretarial course. So for the past nine years she has been working in a London office, again her life is boring, hand to mouth and predictable. Then an amazing thing happens, she wins £350 in a sweepstake.

What should she do with it? Invest it at 3% bringing in a teeny amount of money a year – or splurge it on a Mediterranean cruise? Her brother is outraged by the whole thing, she shouldn’t have been gambling and she shouldn’t think of using the money for herself, he wants her to invest it for his daughter’s future. Sensibly Ann chooses the cruise which of course leads to a complete change in her life.

This is one of those wish fulfilment books, the sort of thing that legions of women must have hoped would happen to them and if it doesn’t happen then reading about it is the next best thing.

The blurb on the back of the book says:
A witty heartwarming read with great romantic and comic characters. This warm feel-good tale will make you smile, and you’ll be rooting for Ann to find lasting love and happiness.

But for fans of vintage fiction it’s more than that. It’s a real trip back to 1934, the attitudes, clothes and the amazing things that happen when you get your hair shingled. In fact I almost felt like getting my own hair shingled, but as I have never met a hairdresser yet who does what I ask them to do I thought better of it!

Why do publishers rarely get the covers of books correct? This one would have been so much more attractive if they had gone down the same road that the British Crime Classics have. Art Deco/1930s clothing, buildings or even a 1930s ship would have been so much better than the soppy effort they chose.
That aside, my thanks go to Corazon Books for giving me the opportunity to read Wonder Cruise – a good read.