I read In the Light of What We Know by Zia Haider Rahman because it won the James Tait Black Memorial Prize in 2014 and I have a personal project to read all of the winners, which I’m never going to complete I’m sure, but I’ll have a good go. It pushes me to read some books that I never would have thought of reading otherwise, this one comes under that category. I had a wee look at the reviews on Goodreads and noted that several people had abandoned the book, that’s something that I rarely do, but I can see why people would do so, this is a very wordy book at 554 pages, actually it seemed longer. I can’t say that I disliked it, but at the risk of seeming sexist I think this one might be appreciated more by male readers. This is partly because a lot of the book is conversations between two men who have been friends since they met at Oxford University.

The narrator is an investment banker of Pakistani origin, it’s 2008 and he suspects that he is going to get the blame for the mess his bank is in, they need a fall guy and he’s the youngest partner, but to be fair – he did have the idea of selling sub-prime mortgages, which caused all the trouble. He comes from a very wealthy background so losing his job is not a great worry. He has lost sight of Zafar over the years since they were at university, and when Zafar turns up at his front door he doesn’t even recognise him. Zafar has been in Afghanistan which as we know had become a hellhole.

The narrator mainly sits back and listens to Zafar as he does a lot of ‘mansplaining’, pontificating on varied subjects that he seems to be an expert on however, he’s not an expert on the one thing that I know about – the design of the Union flag/jack which he says most people think is symmetrical, when we all know that it certainly isn’t symmetrical and anyone putting up that flag has to be careful not to fly it upside-down! But the narrator also points out that Zafar is wrong about some things.

Otherwise Zafar tells the story of his life, from his conception in Bangladesh and poverty stricken childhood to his disastrous relationship with Emily and her wealthy entitled family in London.

Although this is a well written book, sometimes beautifully written, it was in dire need of an editor, and I’m left just hoping that the author has fewer problems with women in his own life than his characters have in the book. The women are all portrayed as being ghastly. 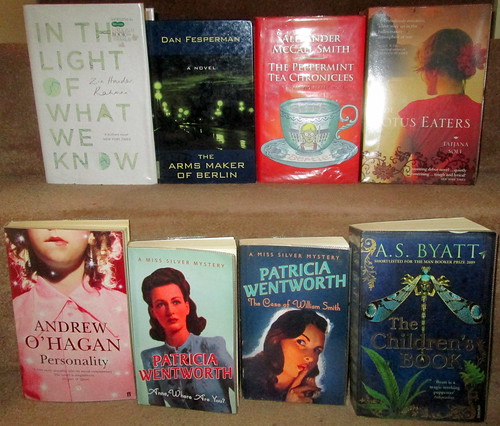 One night a few weeks ago, it was probably some time past midnight, and for some unaccountable reason I had the urge to request several books from the library. I suspected that the winter was going to be a long hard one and the thing that would cheer me up was the prospect of plenty of decent books to read – while ‘coorying doon’. So that is why I ended up going to the library yesterday to pick up eight books! Don’t ask me why I feared I might run out of books of my own to read as that’s just never going to happen. Shamefully I don’t even recognise most of the books that I got, but I do know that several of them were recommended by fellow book bloggers – so it may well be your fault!

The first three books were completely my choice.

I really enjoy Patricia Wentworth’s Miss Silver mysteries so these should be nice murderous comfort reads for me, and the Alexander McCall Smith book is a continuation of his 44 Scotland Street series, I’ve read all the others and I’m a bit of a completist so I’ll read it although a few of them have been a bit hit and miss. They come under the heading of comfort reads too.

4. The Children’s Book by A.S. Byatt. It’s a mystery to me as to why I requested this one although it was shortlisted for the Man Booker Prize, often a reason to avoid a book for me! I have a horrible feeling that I tried reading a book by Byatt before and abandoned it fairly quickly, and I rarely abandon books. I see it has a worrying 617 pages.

5. The Arms Maker of Berlin by Dan Fesserman. I have not a clue who recommended this one but I think they loved it, I hope I do too.

6. In the Light of What We Know by Zia Haider Rahman. It’s another chunkster at 556 pages. Have any of you read this one?

7. The Lotus Eaters by Tatjana Soli. I have a feeling that it might have been Helen at She Reads Books who enjoyed this one. I borrowed it a while ago but had to return it before I got around to reading it as someone has requested it. It’s a James Tait Black winner and I have a project on the go to read all of those winners. It’s a hard task as so many of the books are going to be nigh on impossible to track down, but I’m giving it a go, albeit very slowly.

8. Personality by Andrew O’Hagan. I was attracted to this one while reading some blurb or a blog, the words ‘Scottish island’ jumped out at me so I decided to give it a go. However I’m not sure about it as I believe it is loosely based on the life of Lena Zavaroni, the young Scottish singer who had such a sad and tragic life.