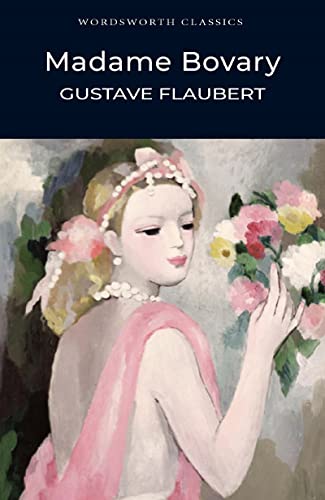 Our copy of this book has been sitting unread since my husband inherited it from his grandfather 30 or so years ago. So I thought it was about time that I got around to reading it, especially as it can be my second book for the Gilmore Girls Reading Challenge.

First published in 1857, Madame Bovary was quickly banned due to the subject matter, so when the charges were dropped it became an instant best seller, as is always the way with banned things.

The story begins with Charles Bovary entering the fifth class of school as a new boy, and very much the country yokel. With years of hard study he eventually becomes a doctor and his parents marry him off to a supposedly wealthy widow, Heloise, who fairly quickly dies.

Charles had already taken a fancy to Emma Rouault, the young, convent educated daughter of one of his patients and they are soon married.

When they are invited to stay at Vaubyessard which is where the Marquis d’Andervilliers lives Emma gets a taste for the high life and becomes very disatisfied with her own. As she sinks ino a six week long depression, Charles is advised to move away from the town where he has a thriving medical practice for the good of his wife’s health.

After moving to the village of Yonville and having a daughter (Bertha) who is put out to a wet nurse. Emma longs for some romance in her life and starts a flirtation with Leon a young law clerk who eventually leaves for the bright lights of Rouen.

Then a local, wealthy bachelor decides to seduce her and Emma is targeted by the local draper (very much like a modern credit card company) who extends masses of credit to her at the same time as encouraging her to get power of attorney from Charles. The debts pile up. Disaster beckons.

I can’t say that I really enjoyed this book. For one thing I didn’t like any of the characters, but I can see that is important because it was the first time anyone had ever written about a woman like Emma Bovary.

But that is probably just me. I’m not keen on modern novels where characters fall for ‘the grass is greener’ type of life. However, I’m glad that I read it as it is a classic.