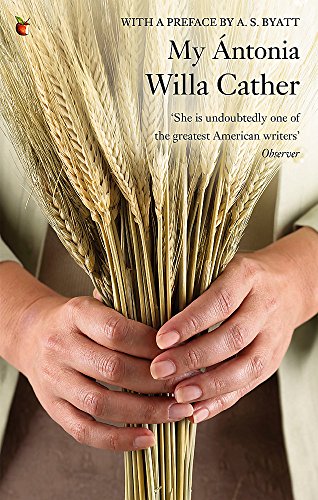 This is the third Willa Cather book which I have read and this one didn’t disappoint me either. I’ve read Alexander’s Bridge and The Professor’s House.

The book begins with the 10 year old Jim Burden travelling to Nebraska by train. Both of his parents have died and he is going to live with his grandparents on their farm near Black Hawk. Ántonia and her family (The Shimerdas) are travelling in the immigrant car ahead and they are headed for Black Hawk too. They are described as Bohemian which meant they were Czech.

The area has already been settled by Norwegians and the book is really about the movement of people and how they cope, or don’t cope, with their changed circumstances. The characters are followed from childhood through to middle-age, and there are surprises along the way at the turns that their lives take.

The immigrants are homesick and pining for their homeland, even when it appears that they have settled down happily. In reality though they are pining for something which doesn’t exist anymore because people and places don’t stand still, just as they haven’t.

We hear tales from the old country and some of them are tragic stories which culminated in emigration. But there is plenty of humour there too, even if it is ‘black’ humour.

Willa Cather has a lovely way with words and describes the countryside beautifully, the trees and grasses and the taming of the land. As the new farmers become more adept over the years, the fields are changed from swathes of red grass to fields full of rippling crops.

I particularly enjoyed her description of Mrs. Cutter:
She was a terrifying-looking person; almost a giantess in height, raw-boned with iron-grey hair, a face always flushed, and prominent, hysterical eyes. When she meant to be entertaining and agreeable, she nodded her head incessantly and snapped her eyes at one. Her teeth were long and curved, like a horse’s; people said babies always cried if she smiled at them. Her face had a kind of fascination for me: it was the very colour and shape of anger.

I can’t help thinking that Mrs. Cutter was a real person, I wonder if she ever read the book and recognised herself.

Anyway, another very enjoyable Willa Cather book is crossed off the list. I had wanted to read O Pioneers first but as I’m still avoiding actually buying books until I’ve read the books which I have in the house waiting to be read, I had to get this one from the library. I might have to request O Pioneers.

2 thoughts on “My Ántonia by Willa Cather”