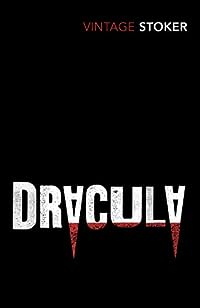 I’m really not into horror in fact I’ve avoided even the mock-horror Dracula/Frankenstein films but spurred on by other bloggers like Stefanie (So Many Books) and Jane GS (Reading, Writing, Working, Playing) I decided to give Dracula a go. And they were right, it is a good read, so much better than the only other book of Bram Stoker’s which I’ve read – The Seven Jewels.

I’m sure everybody knows the gist of the story, because even I did so I’m just going to comment on what led me to read the book which was Stefanie’s remark about it being full of weeping men, which it is, very weird. There isn’t a stiff upper lip between the lot of them, in fact I think the kindest thing that could be said of the men is that they are a bunch of wet willies!

I think it must have been designed by Bram Stoker as a bit of excitement for his lady readers, what with all that male bodily fluid being transferred to Lucy I suppose it was only fair that he should try to titillate his female readers with scenes that I’m sure none of them would have experienced before in Victorian Britain, such a lack of control! How exciting!

Anyway, first published in 1897 and it’s still entertaining us, can’t be bad.

When our boys were wee we rented a cottage in Whitby and because I knew very little about the book I had no idea that it featured in it. I had it in my mind that Dracula was set completely in Transylvania. I thought that all the tourists walking up the steps to Whitby Abbey were doing so just because it had been used as a film location. But Whitby is an interesting place to visit and spookily, while we were there we saw the most amazingly dramatic sunsets that we’ve ever seen.

2 thoughts on “Dracula by Bram Stoker”