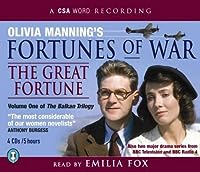 Olivia Manning’s Balkan and Levant Trilogies are probably better known as Fortunes of War as that is what the BBC serialisation was named. The first three books were published separately between 1960 and 1965 as :

1. The Great Fortune
2. The Spoilt City
3. Friends and Heroes
and later published in one big volume as The Balkan Trilogy.

As you can see an audio version is available.

The sequel is The Levant Trilogy which was published in three volumes between 1977 and 1980 as:

If you’re at all interested in World War II you’ll love these books. I read them all in 2008, just before I started blogging and I don’t even have any notes on them but I thoroughly enjoyed the books and they’re written so well I was finished them in no time at all, which was the only disappointing thing really.The writer Anthony Burgess said that they were, “The finest record of the war produced by a British writer.”
Can’t say fairer than that can you?

I remember that I loved watching the BBC serialisation but for some reason it’s never been re-shown, unless I’ve just missed it somehow. It starred a very young Emma Thompson and Kenneth Branagh. I think it was only the second thing that I’d ever seen Emma Thompson in, the first programme was by the BBC again and it was called Tutti Frutti. It was ages ago now and again it doesn’t seem to have been re-shown. But at last, it’s out in DVD.

It was set in Scotland and also had Robbie Coltrane and Richard Wilson in it. I remember it was very funny and is just the sort of thing that they should have on now in these dark and gloomy days. Emma Thompson was able to do a very good Scottish accent. Her mother is the Scottish actress Phyllida Law.

I think I might just put the DVDs on my Christmas list, if my husband’s looking for any ideas!

5 thoughts on “Fortunes of War by Olivia Manning”