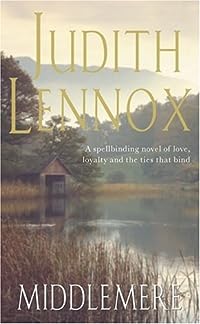 This is the first book by Judith Lennox which I’ve read and I’ll definitely be reading more. It was a fairly recent library book sale purchase and it’s quite a tome at 503 pages but it’s such a smooth read that it didn’t take me long to get through it.

The story begins during World War II with the young Romy witnessing a family tragedy, then moves quickly to 1953 when another traumatic event prompts Romy to move to London where she gets a job in an hotel and begins the work of bettering her situation and making herself an independent woman.

The task isn’t made any easier by her family who all seem to lean on her as they are a pretty feckless bunch. For me anyway there were loads of unexpected twists and turns to the storyline and it helped that there were some really likeable characters to enjoy as well as some sleazebags to have a bit of a hiss at!

I think this is the first book which I’ve read which has 18 year old lads going off for their 2 years National Service in the army which they all had to do until it was abolished in the late 1950s. I’m so glad that it was abolished because I don’t think I would have been able to cope with that at all. I can imagine I would have been hiding my sons to save them from the horror of it all. Some poor souls actually lost their lives in the Korean war while they were doing their NS. People put up with such a lot in those days but I bet all of the politicians made sure that their sons were kept out of harm’s way!

If you enjoy books full of plot then this is for you.

2 thoughts on “Middlemere by Judith Lennox”