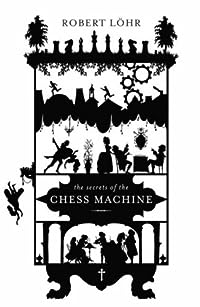 This book was translated into English by Anthea Bell in 2007 and was first published in German in 2005. It’s based on a true story and it’s a historical adventure set in Vienna in 1770. This is Robert Lohr’s first foray into novel writing, he has been a journalist and a screenwriter previously. Lohr has taken the known facts about the chess machine and woven a story around them.

Baron Wolfgang von Kempelen is a talented chap, in the past he has translated things for Empress Maria Theresia and has designed bridges and planned new settlements. But he’s very ambitious and he has the idea that if he builds a thinking machine which can play chess and beat everyone, then he will become very rich and famous and then be given lots of contracts and so make even more money.

So Kempelen and his assistant build an automaton in the shape of a Turk playing chess, but of course it’s just a con trick and he needs a wonderful human chess player who can fit inside the machine. Tibor Scardanelli is an Italian dwarf who is an outcast with no friends and he has been earning a living by playing chess for money. He always wins and Kempelen talks Tibor into becoming the Turk’s ‘brain’ and secreting himself inside the machine whilst Kempelen and his assistant Jacob tour the major cities of Europe with it.

I quite enjoyed this book and although it’s been about a week since I finished it, it’s still fresh in my mind which can’t always be said of books. Some are almost instantly forgotten, or just about anyway!
There’s a lot going on in it, murder, romance of a sort and intrigue but I can’t say that I was chewing at the bit to get back to it whenever I put it down. I think that the fact that there’s really only one likeable character in it is a bit of a problem.

There is an epilogue and author’s notes which tell what happened to the Mechanical Turk after the events in the book. Sadly the machine ‘died’ in a fire at the Chinese Museum in Philadelphia in 1854.

My great blogpal Joan Kyler in Philadelphia kindly dragged her husband to the above sign to photograph it as she knew I would be interested in it. Joan isn’t exactly enamoured with Philly so it’s no surprise to her that the chess playing machine met its fate there! At least they haven’t completely forgotten it.