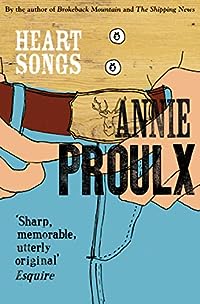 Heart Songs is a compilation of eleven short stories which are all set in the depths of rural New England. It’s hill and wood country so hunting, shooting and fishing feature in most of the stories. This is quite alien to me because although angling is supposedly the most popular hobby in the UK hunting is not popular at all. Guns are just not a part of our culture and it isn’t possible just to go into a wood and shoot something, you need permits and if someone sees a person with a gun nowadays then they are likely to call the cops.

A lot of the stories are about rich city people who have moved into a poverty stricken area and are really playing at being good old country folks. They tend be summer inhabitants only or they give up and leave for the city again after a year or so. The new people are treated with disdain by Proulx so I suppose they’re a pet hate of hers. They’re similar to the people in Britain who buy second properties in rural areas in the UK and so make it impossible for the locals to buy anywhere to live. Let’s face it, that annoys the hell out of us all! Universally, they seem to look down their noses at anyone not from a city. It has to be said though that some of the rural folks in Heart Songs are peculiar to say the least and there’s one woman who has slept with her half-brother! So possibly these stories aren’t for those of us who are a wee bit squeamish about such things or don’t fancy the idea of men going about shooting animals.

But, I love Proulx’s descriptions, the first story begins: Hawkwheel’s face was as finely wrinkled as grass-dried linen, his thin back bent like a branch weighted with snow.

People breathe air as heavy as wet felt – that’s not something which I’ve ever experienced but I can imagine what it must be like now. I think some people think that descriptions equal ‘purple prose’ but I like to know what people, places and objects look like.

I loved The Shipping News and I really enjoyed these short stories too. Previously I had only read Fine Just the Way it is-The Wyoming Stories and now I only have Close Range in the house still to read, that’s the one which has Brokeback Mountain in it and I was less than impressed with the film so I’m going to leave it a while before reading that compilation.

I’ve read that some people really dislike Annie Proulx’s writing style. Is she one of those love them or hate them writers?