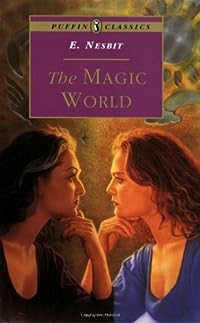 When I was in the kitchen at Christmas (when was I not in the kitchen, I’m definitely going to make it all easier for myself next year) I had the radio on as usual and I was listening to Radio 4 extra which usually has something entertaining and different along the lines of vintage comedy or classic fiction. This time I realised it was E. Nesbit’s Five Children and It which I read some years ago as I never did get around to it as a child.

If you like Edwardian fantasy/fairy tale type things then you’ll enjoy Nesbit, her writing is quite humorous. She was writing at a time when life seemed to be so much simpler and more wholesome – if you didn’t get consumption or typhoid and you weren’t a ‘slavey’ in service.

As it happened I was in the middle of reading a book of Nesbit short stories called The Magic World – a collection of twelve stories involving magic. Perfect for children of all ages and I’m going to be passing my copy of this Puffin Classic on to a ten year old girl I know. I’m not sure if she’ll like it, it might be a bit too old fashioned for a modern miss but she did love the omnibus book of Little House on the Prairie which I passed on to her as part of my decluttering efforts.

Edith Nesbit lived from 1858-1924 and she was a bit of a shocker in her day. She lived a very Bohemian life as a member of the socialist Fabian Society. They were a fairly loose moralled bunch for the times – well for any times really and as I recall she had an affair with H.G. Wells amongst others. It was a bit of a toss up as to who fathered the children involved. But although she was a very successful writer her charitable deeds almost led to her becoming bankrupt, so her heart was in the right place!

7 thoughts on “The Magic World by E. Nesbit”