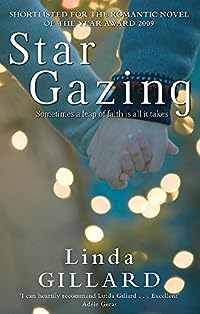 This is the third book I’ve read by Linda Gillard and although I’m not much of a romance fan, I must admit that I do enjoy her romances. The reason I usually steer clear of romance is I find them too predictable but the same can’t be said of her books. She manages to get as many twists and turns into the storyline as you would expect in a crime/mystery novel.

Star Gazing is set in Scotland, mainly in Edinburgh but the action moves to the Isle of Skye for a while. Marianne Fraser is a young widow whose husband Harvey died in the Piper Alpha disaster on the 6th July 1988. If you aren’t of a certain age you might not know that that was the world’s worst offshore disaster, causing the death of 167 men on an oil platform in the North Sea 120 miles north of Aberdeen.

Marianne who has been blind since birth subsequently miscarried her baby which everyone tells her was maybe for the best, and a baby would only have made life complicated. Music has become her passion in life but over time she has developed a coping strategy to protect herself from life and people, but during one of her frequent walks in the Edinburgh Botanic Gardens she meets Keir.

Keir goes out of his way to describe experiences which the sighted population take for granted but Marianne can’t even imagine, like cathedrals and stars. Marianne is thrilled but she still has an urge to protect herself from men and Keir is damaged goods too. It all adds up to an entertaining and cleverly written book. As usual I’m just giving you the bare bones of the story, I don’t like to spoil it for people.

One thing that I did think was a bit strange though – the sense of smell plays quite a big part in Star Gazing, as you would expect from something about a blind person, but the smell of snow was never mentioned. I can see reasonably well but I’ve always been able to smell snow. I know when it has snowed overnight, even before I open my eyes, and I can smell it on the wind when it’s coming, so I would have thought that Marianne would have been able to smell the snow on Skye. What about you, can you smell snow?

Peggy, maybe you could ask your brother Donald if he can smell snow?