My friend Isabel in Kilbarchan was having a clear out of her embroidery and craft stash and she passed a couple of long but narrowish pieces of double thread canvas which she said she was never going to get around to using. As the canvas wasn’t quite wide enough for a medium sized cushion cover I decided to use one of the pieces to make a sampler.

As you can see, the design is more or less what you would find on a cross-stitch sampler but as the whole of the canvas has to be covered, unlike the linen fabric used in cross stitch, it was quite a stitch intensive project.

To vary the textures a bit I used French knots on the left hand tree, I like the effect but it does mean that I can’t frame it under glass as it isn’t flat enough. The design is loosly based on a traditional embroidery sampler using common motifs but I sort of made it up as I went along, just filling the spaces in with whatever I fancied.

The house is like something that a kid would draw, as they tend to be in samplers but I chose to do the background of that part in a pinkish colour. This is because I am quite a cynical person at heart so as far as I am concerned that house is being viewed through rose tinted specs! Otherwise the rest of it is just things which I love. Trees, topiary, flowers, bees, bee hives/skeps, a rabbit (of course) fruit, bird table. The patches of green on either side of the yellow path are supposed to be a formal knot garden and the ‘patchwork green garden’ which the path surrounds has the letter ‘S’ in the middle of it, with the squares picked out in what I think is called Rhodes stitch. My married name and maiden name both begin with ‘S’ – which is just typical as I have a bit of a lisp! I’ve also made an ‘S’ design in what is supposed to be wrought iron railings on top of a garden wall.

On the right hand side there are some motifs of old garden tools which I don’t think have come out very well. The colours are too muted and similar to the beige background, but I wanted it to look old fashioned and not too bright. 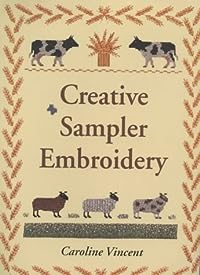 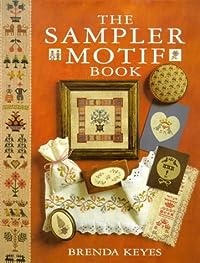 I tried to improve the look by using some silver thread to brighten the tool motifs up. I should’ve put more plants and flowers in that space I think. That’s life though, I find that I’m never completely happy with any project I do and always think it could be better, which is probably just like anyone who does any sort of craft work, it’s what keeps us going I suppose, the thought 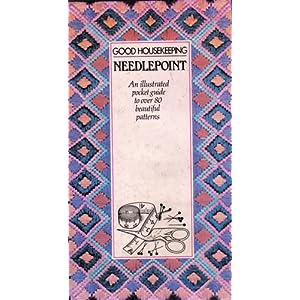 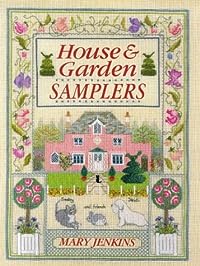 that the next thing we do will be better.

Despite the fact that I did this on a frame it has still got a wee bit distorted so I’ll have to stretch it a bit before mounting it on some board.

I have quite a collection of embroidery/needlepoint books and these are a few of the ones which I like to leaf through for inspiration.