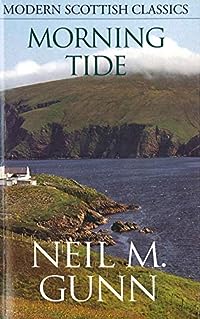 Neil Gunn was born in the far north of mainland Scotland, in Caithness. Morning Tide was published in 1930, and he stuck firmly to what he had experienced himself. It’s the story of a small fishing and crofting community near Caithness, at the end of the 19th century, where life is harsh and the women don’t know if their husbands and sons will come back after their day’s work is done. All too often the sea claims them before they can get back to shore with their catch.

The story begins on the beach where the thirteen year old Hugh Mac Beth is searching for mussels for his father to use as bait on his fishing line. It feels like a sort of rite of passage as Hugh has reached the age when he can be a help to his father instead of just being another mouth to feed.

Neil Gunn writes a good storm and if you’re languishing in horrendous heat wherever you are at the moment, I’m fairly sure that reading this book would cool you down by the way Gunn describes the cold of the sea and the shore.

This is an autobiographical story and it’s really as much about the women of the community as the men. Young and old are having a hard and sometimes cruel life and the community is dying as the young men go off to seek their fortune elsewhere. Waving off their sons to places like Australia was something that the parents just had to do, knowing that they would never see them again, but at least they would be alive and hopefully living a better life.

Hugh grows up in lots of ways, like being allowed to take part in a poaching party but he can’t neglect his schoolwork and he has to learn poetry by heart, failure to do so will result in the schoolmaster doling out the usual punishment – getting the strap/belt/tawse – up to six strokes of it on the hand.

If you’re interested in what Scottish life was like back then then I think that Morning Tide will give you a clear idea. It wasn’t all doom, there were occasional joys for the folks too.

This book is written in plain English and Neil M. Gunn is thought to have been one of the most influential Scottish writers of the first half of the 20th century.