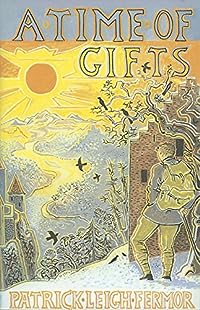 You probably have the same experience I have, that is – whilst you read through your huge pile of ‘to be read’ books, it never gets any smaller as it’s common for one book to mention several others that you feel you just must read too. That’s what happened to me when I started reading some of Deborah (Mitford) Devonshire’s books, the name Patrick Leigh Fermor kept coming up, so when I saw some of his books in a second-hand bookshop, I pounced.

A Time of Gifts was first published in 1977 and it’s an account of his journey on foot from the Hook of Holland to the Middle Danube. He set off from London at the age of 18 with the intention of walking all the way to Constantinople. It was interesting times indeed as when he reached Germany Hitler had just got into power, he was still regarded as something of a joke by the majority of the population and was absolutely hated in Austria.

This book is a great eye-witness account of the state of Europe in the early 1930s, but apart from that the writing is beautifully descriptive without being purple-proseish.Here’s a wee taster:

The gables of the Rhine-quays were gliding past and, as we gathered speed and sailed under one of the spans of the first bridge, the lamps of Cologne all went on simultaneously. In a flash the fading city soared out of the dark and expanded in a geometrical infinity of electric bulbs. Diminishing skeletons of yellow dots leaped into being along the banks and joined hands across the flood in a sequence of lamp-strung bridges, Cologne was sliding astern.

Don’t you wish you had been there – I felt I almost was! Fermor was one of those unruly children who had been expelled from various schools, this journey seems to have been just what he needed at this time of his life, but I can imagine that his mother’s heart must have been in her mouth when he told her of his plans.

He wrote about the second part of his journey in his book Between the Woods and the Water which I’ll be reading soon.

In World War II he became famous for kidnapping the German garrison commander on Crete, his exploits were made into a film called Ill Met By Moonlight, starring Dirk Bogarde.

12 thoughts on “A Time of Gifts by Patrick Leigh Fermor”