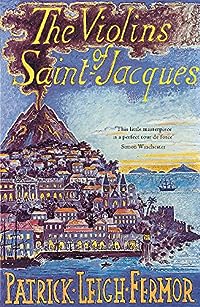 I’ve recently enjoyed reading some of Patrick Leigh Fermor’s travel books and I have a habit of trying to read everything by an author once I’ve ‘found’ them, so when I saw this book in a shop in Great Malvern I had to buy it, even although it’s a novel, his only one actually.

It was originally published in 1953 and is set in the Caribbean, a place I would never want to visit, being a cold country person. I usually avoid ‘hot climate’ books when I can, I know – daft but true!

Anyway, I did enjoy the book but not nearly as much as Fermor’s A Time of Gifts and Between the Woods and the Water. There is the same sparkling descriptive prose of course and if you want to ‘experience’ a volcanic eruption in safety then you couldn’t do better than to read this book.

To begin with I found myself thinking that it seemed to be exactly like one of his travel books but when Fermor befriends Mademoiselle Berthe de Renne a very elderly artist who is living in Mitylene in Greece, he becomes entranced by her stories of life on the Caribbean island of Saint-Jacques before the Great War. Berthe is looking back to her youth but this book is more than descriptive decadence. If you want to go deeper I suppose it’s about disappearing worlds and loss.

It has plenty of interesting ‘by the byes’ such as the fact that the French Revolution shenanigans extended to the French colonies, something I hadn’t realised before but I suppose it is obvious they would. The really heartening thing though is that when a guillotine was erected in Saint-Jacques and the first Royalist head hit the basket, the negroes who witnessed it were horrified and broke through a cordon of guards to tear the guillotine to bits. The same thing apparently happened in Haiti, thus proving that the negroes were more civilised than the French if you ask me. I believe that yesterday (16th October) it was the 220th anniversary of Marie Antoinette being guillotined and there was an auction of some of her possessions, if you’re interested have a look here.