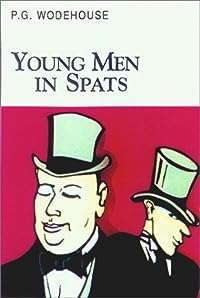 It’s such a long time since I read anything by P.G.Wodehouse, but I bought this lovely hardback at a National Trust booksale recently and although I have loads of books waiting in a queue to be read, this one jumped to the front because I was just in need of something really light and cheery.

It’s a book of short stories and I suppose you could say that the subject of most of them is cherche la femme as they’re all about young men trying to win the attention of bright young things.

They young men are all members of the Drones Club and most of the stories feature Freddie Widgeon, Wodehouse was economical about the other characters, most of whom are categorized as Beans, Crumpets or Eggs. The later stories feature a Pint of Bitter, a Small Bass, a Light Lager – you get the idea I’m sure. So there’s a lot of: A Crumpet said to a Bean…. And it was this mode of writing which made me stop and think – what does this remind me of and of course it was Damon Runyon‘s Tales on Broadway.

Do I hear you say That’s absurd? Fair enough, after all on the surface the only similarities are that they are both books of short stories. They’re set in different continents, the characters are from very different backgrounds but there’s the same sparkling wit, stupid men, fearsome as well as delectable women and lots of fun.

10 thoughts on “Young Men In Spats by P.G. Wodehouse”