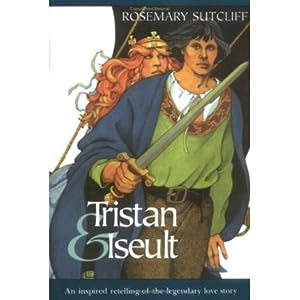 This story is one of those things which was a bit of a cultural blindspot as far as I was concerned, because I really didn’t know much about it, apart from the fact that Wagner wrote an opera around the story. So when I saw this Puffin book in a charity shop I decided to buy it and rectify matters. Obviously this was written for children, as it’s a Puffin, not a Penguin, and I have previously read and enjoyed The Eagle of the Ninth by Rosemary Sutcliff, which was made into the film The Eagle fairly recently. She does have a lovely way of painting the pictures for you.

Basically the story is very similar to the Arthur-Guinevere stories but Tristan and Iseult predates those ones. As with Arthur, the tales have been told and set in most European countries, with slight variations and in the foreword of this version Sutcliff explains that she decided to leave out the love-potion part of the storyline, as she thinks that that was added in medieval times as an excuse for Tristan and Iseult falling in love with each other.

It was a time when kings could give their sisters away in marriage to any chap who had pleased them, as a reward, and that’s exactly what King Marc of Cornwall did. That poor Cornish princess didn’t even seem to have a name, never mind a say in her future. Anyway, Rivalin King of Lothian took her back to his home in the north, but within a year his queen died, just after producing a son, who was named Tristan, which means sorrow.

Suffice to say that 16 years later Tristan asks his father the king if he can travel to Cornwall and so begin his adventures, including dragon slaying in Ireland and a quest to find a particular red-haired woman for King Marc, who is planning to marry again. Of course it turns out that the red-head is none other than Iseult the King of Ireland’s daughter. Unfortunately Tristan and Iseult fall for each other so it all ends in tears.

I enjoyed this old legend and as this is a children’s version it’s a very quick read at just 138 pages. It involves all the Celtic areas of Britain and Brittany too.

I don’t know if it was because of David Bowie being all over the news whilst I was reading this book, but that word ‘sorrow’ is mentioned right at the beginning of the book and I had his version of ‘Sorrow’ going through my head a lot of the time I was reading this, except it should have been long red hair and not blonde!

A lot of the story takes place in Tintagel, Cornwall which is one of my favourite places. It’s positively magical, have a look at the images here. They don’t give you the correct colour of the sea around there though, which is a beautiful deep jade green.

2 thoughts on “Tristan and Iseult by Rosemary Sutcliff”