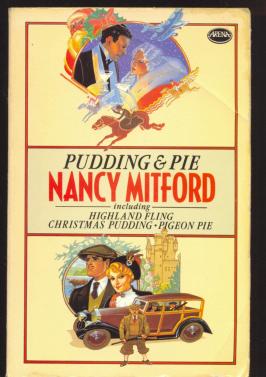 This is a quick read at just 186 pages and it was first published in 1940, although my copy is a 1982 reprint. Nancy Mitford added this plea under the dedication in 1951:

I hope that anybody who is kind enough to read it in a second edition will remember that it was written before Christmas 1939. Published on 6th May 1940 it was an early and unimportant casualty of the real war which was then beginning.

I suppose she felt the need to add that as when the book was written it was during the ‘phoney war’ when nothing much was happening, there were no air raids to speak of and the bombs hadn’t begun to rain down on the civilians of Britain. It was a time when people were either joining the armed forces or volunteering for the Home Guard, ARP, Red Cross and all the many societies which were galvanised into action against fascism. They were all ‘vamping till ready’. In truth the war was a great excitement in many people’s lives and it pepped up their humdrum existences – but at what a price.

Anyway – to the book. I enjoyed it, it’s a frivolous piece of silliness reminiscent to me of Wodehouse, probably because it involves the English upper classes and sheer stupidity.

Lady Sophia is a young married woman, disappointed by her marriage and bored by her husband, they’ve settled down to make the best of it and that really means having an open marriage and tolerating each other’s ‘friends’.

Sophia volunteers at St Ann’s Hospital First Aid Post where she spends her time answering the phone and helping with the volunteer ‘casualties’ who appear whenever there’s a dummy practice raid. She knows she can manage as long as she can avoid knee joints, which give her the horrors. I have sympathy with her as I’m not keen on feet.

The rest of Sophia’s society chums are all pretending to be doing something terribly important for the war effort, and are dropping hints that they are really spies. Princess Olga Gogothsky (nee Baby Bagg) an old school enemy of Sophia’s is being particularly annoying and is even moving in on Sophia’s favourite escort of the moment.

The real spies are much closer to home though and stupidity and self-absorption almost end in disaster. It’s a silly but fun read, which sometimes is just exactly what is required.

It is quite amazing that at the time this book about spies in Britain was published, Nancy was instrumental in having her sister Diana banged up in prison for years. Nancy was asked by someone in the government if her sister Diana was likely to work against the British government if she was allowed her freedom and Nancy replied that in her opinion Diana should be imprisoned – so she was. That’s sisters for you – mind you I think Diana would have done her damndest to make sure that Hitler won the war, thinking that her husband Oswald Mosley would then be in a position of power in Britain, instead of being seen as a menace to society, as he was.

The cover above is the nearest I could get to the edition which I have, it’s very similar but mine is just Pigeon Pie, I haven’t read the other two books.