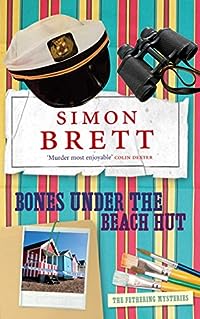 This was a random choice from one of those paperback carousel things at the library and I’ve never read anything by Simon Brett before, but I just wanted to read something up to date for a change and I noticed that it says on the cover:
‘Murder most enjoyable’ Colin Dexter.
But it wasn’t really, enjoyable that is, well not for me anyway.

It’s set in West Sussex in a coastal village called Smaltings which likes to think it’s a class above the rest of the seaside holiday resorts.

Carole Seddon has moved there and is expecting a visit from her daughter and granddaughter. Carole decides to rent a beach hut so that her toddler granddaughter can get the most out of her bucket and spade holiday, but Carole almost immediately realises that the hut is damaged, in fact someone has tried to light a fire underneath it and the subsequent inspection uncovers bones. Carole and her best friend Jude start their own investigation.

It wasn’t until I got this book home that I realised that the actual title gives away a large part of the storyline, and I just think that that is daft, it’s much better surely to discover that bones are found under a beach hut as the story unfolds. But that’s a minor gripe. I wasn’t at all keen on the character of Carole. Simon Brett goes to great trouble to describe her (over and over again) as being very shy and timid but when she’s making her own inquiries into the mystery she’s really not at all shy and retiring, in fact she’s aggressive and badgering. Her character was just not real to me, unless she was meant to have a split personality, or looking at it frivolously – she was a Gemini (twins)! In fact for me there weren’t any likeable characters at all, and far too many really obnoxious ones whom I would rather not be in the company of.

I also think that I had a problem with it because the amateur sleuths are two women of a certain age and it reminded me of that TV programme called Rosemary and Thyme. Normally I love detective TV stuff but that one is just one too many marshmallows in the marshmallow genre of programmes, well okay two marshmallows.

So I don’t think I’ll be reading any more by Simon Brett for a while, but at least I know what sort of thing he writes now.

10 thoughts on “Bones Under the Beach Hut by Simon Brett”