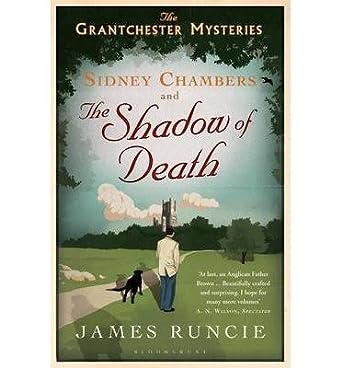 This is the first book by James Runcie which I have read. The setting is 1953, Cambridge, where Sidney Chambers, a 32 year old bachelor and Church of England canon becomes involved in helping the police with various investigations.

It’s impossible to read something like this without being reminded of the Father Brown mysteries. I do know Grantchester and Cambridge and I always like it when I can picture all the locations, but I didn’t like this book as much as I thought I would partly because it doesn’t read at all like a novel, but is more like a collection of novellas or long short stories which are loosely linked, if you see what I mean.

The Grantchester mysteries, which is what this series is called, apparently run from 1953 to 1981 or in other words from the Queen’s coronation to Charles and Diana’s wedding which is an idea that I like so I will read the next in the series in the hope that I enjoy it more, and to find out if Sidney becomes the Archbishop of Canterbury.

James Runcie is the son of the late Robert Runcie, who was Archbishop of Canterbury and was installed in 1980, it occurred to me that James has taken Robert as a template for the character of Sidney Chambers. They both have the same World War II record of being in the Scots Guards and being war heroes and winning the Military Cross. I suppose it’s a way of keeping his father alive, well that’s what it seems like to me.