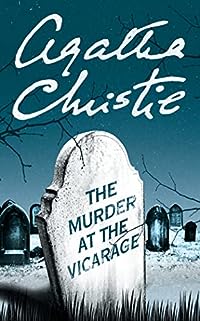 This one was first published in 1930 and is apparently the first one in which Miss Marple appears, it has been dramatised for TV in fact I’ve seen it umpteen times but I still enjoyed the book. The story is told by the vicar of St Mary Mead, Mr Len Clements but the whole book is very dialogue heavy, which must have made dramatising it so easy as Christie is very good at dialogue with a perfect ear for the differences in speech of the various classes of those days.

Colonel Protheroe is much disliked in the village so when he is found dead in the vicar’s study, sitting at his desk, there are plenty of possibilities as to who the culprit might be.

The relationship between the vicar and his much younger wife Griselda is a lovely one with Griselda’s light-hearted personality – on paper everything that a vicar’s wife shouldn’t be – perfectly complementing her husband’s necessarily more serious attitude, but he is obviously besotted with her, a great couple of characters.

In general the books are always better than the TV shows but I must admit to loving the period clothes, jewellery, handbags and hats, all very stylish, whether the setting is 1930s, 40s, or even 1950s, although that isn’t my favourite decade.

If you haven’t seen the most recent TV Murder at the Vicarage you can see it on you tube below.

8 thoughts on “The Murder at the Vicarage by Agatha Christie”