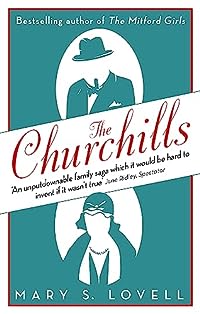 As you will imagine this is a fairly hefty tome at over 600 pages including the index, but I worked my way through it fairly quickly as really there’s never a dull moment and as ever Mary Lovell’s footnotes are not to be missed. This book is not heavy going, serious history but more a gossipy account of a famous and lets face it, dysfunctional upper class family.

In fact I felt quite annoyed in parts as the Churchills’ attitude to life was – I want it, I’m having it, I don’t care that I can’t afford it. It’s an unattractive trait whether it’s practised by the so called upper classes or people on the dole, but it’s common enough, although they wouldn’t agree with that word common. I couldn’t help remembering that when the Queen Mother died it was reported that she was 3 million pounds in debt, I wonder if it was ever settled up.

Anyway, back to the book, Winston Churchill was of course a descendant of the famous Duke of Marlborough, but it was his cousin who was destined to be the duke. Winston Churchill’s parents were both entirely wrapped up in themselves so he didn’t see much of them, he obviously felt neglected and hard done by but I think that he probably saw as much of his family as any other child who was sent off to boarding school, and even when I was growing up in the 1960s I didn’t see that much of my parents as they were busy working and we were all latch key kids in those days, and in my own family hugs and kisses didn’t exist. Bizarrely Winston didn’t realise that he and his Clementine were equally neglectful of their children, Winston always had to come first, but that’s the history of all dysfunctional families, it’s a hard habit to break it would seem. Winston’s son Randolph was ruined by his upbringing, he never had any guidance from his father and was allowed to pontificate to men of power and experience, never to be gainsaid by anyone for fear that they would appear to be rude.

There’s a lot of bed hopping and so many marriages and divorces I was quite dizzy with it all, and quite a few suicides too. Nobody ever seemed to learn from their mistakes, hence the multiple divorces. Winston seems to have been drawn to people who were a bit ‘dodgy’ and as his wife Clementine seems to have been a better judge of character she lived in fear of his reputation being tainted by them. It must have been particularly galling in later life that Winston chose to spend time with people that she didn’t like or trust rather than be at home with her, particularly as the home was Chartwell, a house which she had never wanted him to buy. The whole family would have been improved by a big dollop of Presbyterianism but it seems that it was only Clementine who had been brought up in that way and for some reason she didn’t feel able to guide her children away from the worst aspects of their privileged lives.

Winston Churchill had been a supporter of Edward VIII when he wanted to marry Wallis Simpson, which proves to me anyway that he was a rotten judge of character. He was recently voted the greatest Briton in a BBC poll, something which he would have adored, but that was obviously because of World War II, Churchill was far from perfect and in his earlier political career he was a frequent turn-coat which he was ridiculed for.

At the moment some people are keen to go to war with Syria because poison gas has been used on some sections of the population but it isn’t generally known that Churchill ordered the dropping of poison gas on people in Northern Russia in 1919, you can read about it here.

Well nobody is perfect, but I do get the impression that Mary S. Lovell has looked on the subject with rather rosy specs on. For instance plenty of people are described as being alcoholics, including Winston’s son Randolph, but there’s no mention that I can recall of Winston being an alcoholic, although it is recounted how much champagne he must have drunk in a lifetime. He seems to have drunk champagne and old brandy like it was water. I read somewhere that Stalin was shocked when he first met Winston as he drank his way through the meeting and was generally drunk. I can’t think that that was a good way to behave in front of someone like Stalin and I’m sure that that must have had a bearing on Stalin and Roosevelt having secret meetings with each other, elbowing Winston out of the decision making.

Anyway, most of this book is about Sir Winston Churchill although it does begin way back in 1650 it isn’t long before it gets to what most people will want to know most about, that is Sir Winston’s parents Randolph and Jennie Churchill and Winston himself. I did find this to be a fascinating read but I did know of many of the people and situations which appear in it, people younger than me won’t know about the scandalous Duchess of Argyll who also features in the book, albeit briefly.

Apparently an American General asked for Winston’s advice about a speech he had written. Basically Winston said that there were too many big words, speeches should be kept simple and to the point hence – We shall fight them on the beaches. Coincidentally Ann Shirley (of Green Gables) was given the very same advice by her teacher!

Early on in the book the author speculates that there is a possibility that Winston’s mother Jennie was pregnant when she got married as he was born seven months after the wedding, but I can clearly remember my mother telling me that he weighed only as much as a bag of sugar when he was born at Blenheim, so that was 2lb, definitely premature then. I don’t know where my mum gleaned that information but it must have been common knowledge at some point, as common as knowing that his hobbies were brick-laying and painting art. You can have a look at some of his art works here. Apparently it was the artist John Lavery’s wife Hazel, who advised him on how to begin a painting, basically attack the canvas, and after that he felt no hesitation in doing just that.

On a personal note one of my earliest TV memories is of watching Sir Winston’s funeral on TV, I was 5 then, and the first time I went to London with my mother some years later we did the usual touristy things. When we were standing gawping at Buckingham Palace a chap went through the gates, in my mind he got out of a cab and was dressed in top hat and tails, but you know what the brain is like, I could be completely wrong. My mother was one of those women who could tell you all about the royal family, down to second cousins of the Queen and at some point she must have devoured a copy of Debrett’s (stud book of the upper classes.) Well, Mum said – “That’s Randolph Churchill, he doesn’t look very well. He’s not a patch on his father.” Even as a wee girl I could see that Sir Winston would be a hard act to follow, and it wasn’t long after that that Randolph died.

I could write about this book for a long time, bits keep coming back to me, such as the fact that the Churchill family seem to have a capacity for falling in love at first sight, which might explain the divorces because of course their is no such thing, it’s always LUST at first sight!

I see that I’ve meandered even more than usual and written over 1,000 words on my impressions of this book, sorry about that. I completely forgot to mention that Anthony Trollope used the Marlborough family as copy, presumably the Duke of Omnium’s family, his political books are my favourites and if we didn’t have Trollope we wouldn’t have had Thirkell …

4 thoughts on “The Churchills by Mary S. Lovell”