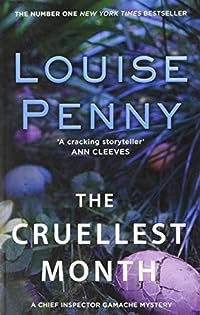 This is the first book by Louise Penny which I’ve read and she was recommended by Joan Kyler who has a good idea of what I like, and I did enjoy this one. I tend to stick to vintage crime and there’s so much of it to read, but recently I’ve been thinking that I should read some contemporary stuff and this fitted the bill. I’m probably the last person in the western world to find out about this Canadian writer. I just wish I had waited and started reading them in order instead of grabbing the first one I saw.

Set in Quebec in the village of Three Pines, the sort of place where people still roll eggs at Easter and the hub of the village is Olivier’s Bistro where people gathered for the company and gossip as much as for the coffee and food.

But there’s an evil doom looming over Three Pines in the shape of a murder house, a dark presence on the hill above the village. In fact nothing about the village and its inhabitants is as it seems to be on the surface.

Gabri who runs the B&B likes to get his money’s worth out of his guests and they often end up being unwilling entertainers for the villagers. His new guest Jeanne has been lined up as a psychic and unknown to her she is expected to perform!

Things get completely out of control and C.I. Armand Gamache of the Surete du Quebec is called in to investigate.

I’ll definitely have to track down the two books which come before this one so that I can see the development of the village’s characters and get to know them better. There is one character who is portrayed as being a bit weird, or certainly unusual as he has such an affinity with trees that he can hear their cries of pain if they are being abused. I completely understand that, maybe I’m weird too!

12 thoughts on “The Cruellest Month by Louise Penny”