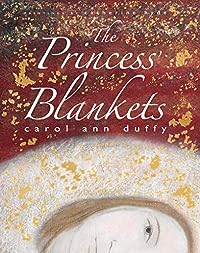 I bought this book in one of those Scottish bookshops which have appeared in some Scottish towns, you know, buy two for £5 and they are all either by Scottish authors or are about Scotland, perfect hunting ground for the Read Scotland 2014 challenge.

Carol Ann Duffy is of course the British Poet Laureate, she’s the first female to hold the post and is Scottish, you can read about her here and read some of her poems.

The Princess’ Blankets is a fairy tale which is written along very traditional lines. A young princess suffers terribly from the cold, nothing that the King and Queen – her parents – do will warm her up. When the king declares that whoever manages to solve the problem of the shivering princess will be richly rewarded, his people try everything too but nothing works. But of course, this is a fairy tale and it does have a happy ending.

You can have a look inside this book and you get an idea of some the illustrations which are by Catherine Hyde. Her work has a hint of Gustave Klimt about it. In fact I think they look better on screen, the only complaint I have is that some of them are very dark, especially as presumably this book is supposed to be aimed at small children. I absolutely get that the illustrations are meant to be going from darkness to light, but in print I found the details a bit difficult to make out, maybe it’s my eyes, or the supermurkovision which is the result of these blasted eco light bulbs which we have to use nowadays, which make my house resemble the inside of a cave at night.

4 thoughts on “The Princess’ Blankets by Carol Ann Duffy”