On our pre-Christmas visit to Glasgow we ended up way up at the top of Sauchiehall Street, we hadn’t meant to walk that far but it was a nice bright day and we just kept finding more and more good buildings for Jack to photgraph, he’s a bit of an art deco fan. 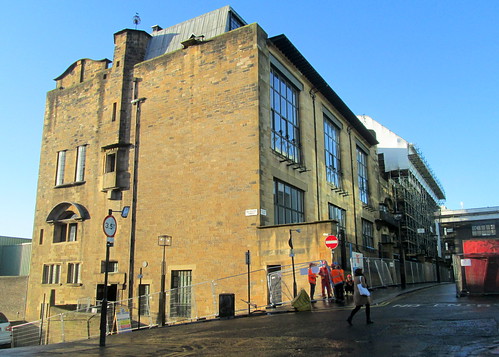 Anyway as you can see from these photos we decided to hike up to the Art Nouveau Glasgow School of Art as it was so close to where we were, and I mean hike, I had forgotten how steep that hill is! As you can see from the photos a large part of the building is swathed in scaffolding and I think some sort of covering has been put over the top, to keep the rain out. 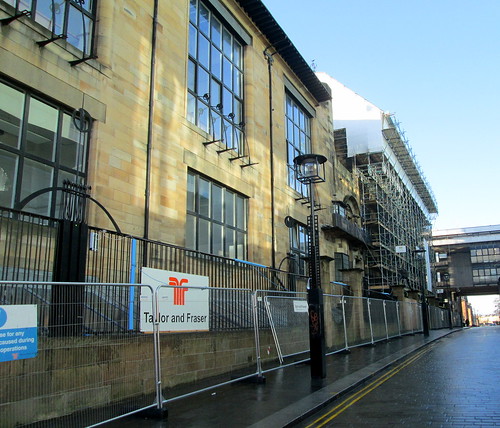 There was a chap on the TV recently saying that they should NOT rebuild the library and the rest of the damaged building as it was, but should add on a modern design instead. I really hope that that was just some hopeful architect in wishful thinking mode because although a newly built Mackintosh building is obviously not going to have the same history as the original, it’ll be an awful lot better than some random structure being tacked on to Mackintosh’s masterpiece. 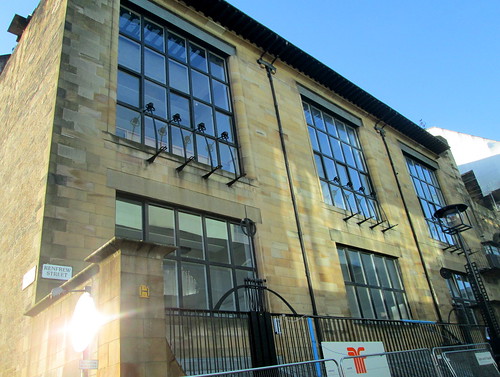 As you can see from the photo above the undamaged part of the building has some lovely details but apparently his designs were always practical as well as pretty. The metal brackets at the windows were for the window cleaners to put their ladders against. I still wouldn’t fancy that job though. If you’re interested you should have a look at the lovely images of The School of Art here.

I think it’ll be scandalous if a decision is taken not to rebuild the damaged parts of the building as they were originally, apart from anything else a new extension to the Art School was just opened across the road from the original – and it is in a modern architecture style, and I bet it doesn’t last anything like as long as the old building has, I give it 30 years!

5 thoughts on “The Glasgow School of Art”